Items related to Never Hit a Ghost With a Baseball Bat

Clifford, Eth Never Hit a Ghost With a Baseball Bat

Never Hit a Ghost With a Baseball Bat 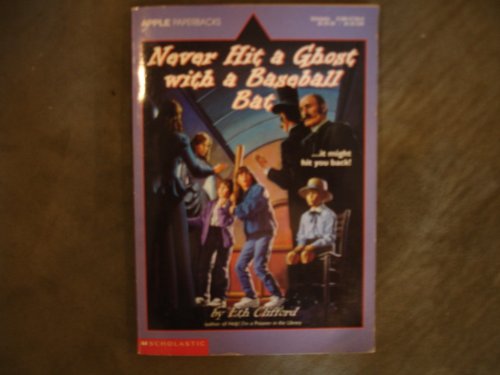 Mary Rose and Jo-Beth Onetree join their father on a visit to an antique trolley museum, a fascinating place that may actually be haunted by real ghosts

Eth Clifford's best-known title, Help! I'm a Prisoner in the Library (1979), concerns a situation she would no doubt welcome. A passionate reader as a child, she became a dedicated author and editor with scores of her own titles on library shelves. Clifford was born on Christmas Day in New York City and moved several times as a child. She remembers learning to read in a one-room schoolhouse set in an apple orchard, and she discovered the public library when her family later moved to Philadelphia. At age sixteen, she met her future husband at a poetry reading in Brooklyn, and it was he who encouraged her to begin writing while he was stationed in the South Pacific during World War II. Clifford began with short stories and soon published her first adult
novel, Go Fight City Hall (1949), which was a Reader's Digest Book of the Month and was excerpted in humor anthologies. Clifford, her husband, and their daughter later moved to Indiana, where they lived for twenty years. While there, Clifford contributed to many social studies, science, and language arts textbooks for children, and this work eventually developed into her primary interest -- writing children's fiction. Clifford's books for children cover a wide range of ages and subject matter. Her youngest readers can match their sleuthing abilities against an animal detective in Flatfoot Fox and the Case of the Missing Eye (1990), handsomely illustrated by Brian Lies.
Middle-grade readers enjoy Clifford's deft combination of suspense and humor in a mystery adventure series of five novels about Mary Rose and Jo-Beth Onetree, the sisters who were first introduced in Help! I'm a Prisoner in the Library, which won the 1982 Young Hoosier Award. Among the story's appealing elements are the believable relationship between the practical and responsible Mary Rose and her younger, very dramatic sister and the real sense of fear generated as the girls feel their way through the darkened rooms of the old mansion turned library. Subsequent adventures find the sisters sleuthing in such places as a ghost town and a shoe museum. All five books were illustrated by George Hughes. Clifford often incorporates interesting factual information into her humorous works. Children reading Harvey's Marvelous Monkey
Mystery (1987) have an opportunity to learn about the companion monkeys who are trained to perform useful services for their physically challenged owners. In The Rocking Chair Rebellion (1978), a book for teens that includes contemporary problems, a young girl finds herself involved with the distresses of the elderly when she volunteers to work for the aged. This book was made into an "ABC Afterschool Special." Some of Clifford's books are written with a simplicity of style coupled with an emotional resonance that appeal to readers of all ages. The Remembering Box (1985) is a quiet and beautifully told story of the legacy that a Jewish grandmother gives her grandson and the understanding between them that allows the boy to accept her death. Clifford once called her ambition the desire to "rival Scheherazade and tell one thousand and one stories." She has succeeded in creating a readership that looks to her for a variety of books, all with strong characterization, sensitive treatment of relationships, authentic detail, and wonderful adventure.

Grade 3-5-- A fast-paced mystery filled with suspense. Mary Rose and Jo-Beth Onetree and their father visit a trolley-car museum, where their guide tells them about the strange happenings there. Almost immediately, they experience one firsthand--a voice warning them of danger. This is followed by a talking bear, mannequins that come to life, singing witches, and an out-of-control popcorn machine. Just as the girls feel they are doomed, they find the culprits--two boys and their unemployed, ill father who have been making the museum their home. The girls take readers on an entertaining adventure that will keep them on edge from chapter to chapter. In addition to being a well-executed story, it's a good selection to reach for when a patron asks for "something scary." --Cheryl Cufari, N. A. Walbran Elementary School, Oriskany, NY
Copyright 1993 Reed Business Information, Inc.

1. Never Hit a Ghost With a Baseball Bat

2. Never Hit a Ghost With a Baseball Bat

4. NEVER HIT A GHOST WITH A BASEBAL