Items related to Elizabeth I: Red Rose of the House of Tudor, England,...

Lasky, Kathryn Elizabeth I: Red Rose of the House of Tudor, England, 1544 (The Royal Diaries)

Elizabeth I: Red Rose of the House of Tudor, England, 1544 (The Royal Diaries) 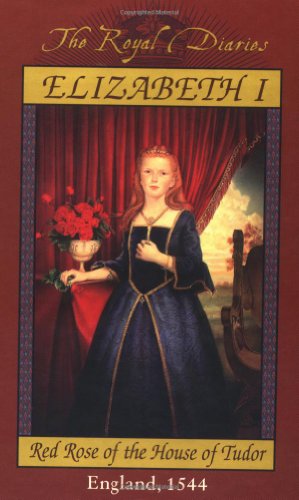 As a new edition to The Royal Diaries series, this factual tale offers young readers an insight to the life and times of this famous royal prior to her days on the throne as the Queen of England.

"Do you know who I am? I shall tell you. I am Elizabeth, Princess of England, daughter of Henry VIII and his wife Anne Boleyn. I am eleven years old. My mother, once Queen, is now dead. Almost eight years ago, when I was not yet three, Father chopped off her head."

Daughter of a fallen queen, young Princess Elizabeth lives a complicated and dangerous life. She fears her father's famous temper but loves him dearly, noting that she would trade all her jewels just to be noticed by him. She also loves her brother Edward, heir to the English throne, but doesn't like her older sister Mary, who torments her and conspires against her. Kat, her governess, is so worried for Elizabeth's life that she spends hours checking their room for poison whenever they move to a new palace. Court intrigues swirl around her, the French are threatening an invasion, and Kat is clamoring for her to have another bath--that makes nearly six in three months! Through Elizabeth's diary, author Kathryn Lasky brings the Tudor world to life: glittering banquets of peacock, eel, and swan; palaces so stinky that "everyone goes about with their noses buried in pomander balls to hide the stench"; archery contests, where Elizabeth excels; and Latin and logic lessons... where she needs a little work. Some of the history is slightly flawed (a misplaced date or two), but readers will enjoy the great detail as they learn about the childhood of one of England's greatest monarchs. An epilogue, with Tudor family trees, paintings, and background information enhances this already excellent and entertaining book. (Ages 10 and older) --Sunny Delaney

8. Elizabeth I: Red Rose of the House of Tudor, England, 1544 (The Royal Diaries) Lasky, Kathryn