Items related to That Book 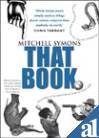 About the Author:
Mitchell Symons was born in 1957 in London and educated at Mill Hill School and the LSE, where he studied just enough law to get a Third. Since leaving BBC TV, where he was a researcher and then a director, he has worked as a writer, broadcaster and journalist. He was a principal writer of early editions of the board game Trivial Pursuit and has devised many television formats. Currently he writes an award-winning weekly column for the Sunday Express.