Items related to Cosmic Alignment: With the Cosmic Mind and the Cosmic...

Countess, Conrad Cosmic Alignment: With the Cosmic Mind and the Cosmic Pattern 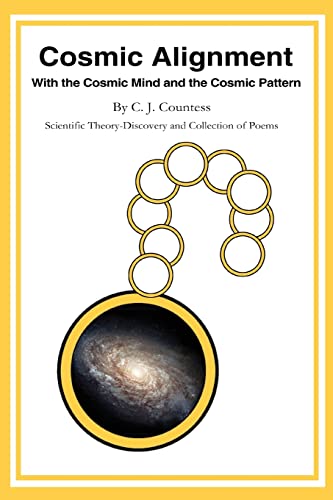 Cosmic Alignment with the Cosmic Mind and the Cosmic Patternclearly outlines 1) That the structure of the Universe is parallel to and resembles the structure of the Mind as if the Universe is a universal mind and our minds miniature Universes.2) A universal pattern of expansion/contraction that pervades the Universe, the Mind, and Society.3) An alignment of the Universe as a whole and the Individual.Interestingly enough, there has been a recent growing interest in a "Cosmic Alignment," that coincides with this one and is scheduled to reach its peak (Dec 21 2012) ushering in great change, for better or worse, depending on ones point of view. This has been featured on "The History Channel," and the subject is also all over the web. One only has to Google "Cosmic Alignment," to bring it up.Also, the "2006 Nobel Prize in Physics", was awarded to two physicist for their discovery of a "Cosmic Pattern and Alignment". World renown physicist "Stephen Hawking" called it, "perhaps the greatest discovery of the millennium or perhaps all time". This is no mere coincidence in the negative sense of seemingly but not really related, but is in fact an affirmation of the timeliness and correctness of the subject of the book, for they are all one and the same "Cosmic Pattern and Alignment". "There is nothing more powerful than an idea whose time has come" Victor Hugo, influential French poet and social activist.This is an Idea whose time has definitely comeThe Social, Philosophical and Scientific implications are tremendous.Drastic change is coming ready or not. But it doesn't have to be all negative and won't be with a better understanding of this "Cosmic Alignment and Pattern". This book will shed much light on that much needed understanding, which is a must for every human being on the planet. When you read this book you will find that I am correct.Conrad J Countess

Conrad Countess was born in Baltimore Maryland, where he lived most of his life but now resides in Columbia Maryland. One day he made a profound discovery that made so much logical and scientific sense that it spoke for itself, louder than any degree or title could. He believes that this is the way it should be, the evidence should speak for itself. And no one should be believed just because they have a degree or disbelieved because they don?t.

1. Cosmic Alignment: With the Cosmic Mind and the Cosmic Pattern (Paperback)

Book Description iUniverse, United States, 2004. Paperback. Condition: New. Language: English. Brand new Book. Ever notice how a spiral galaxy like our own resembles a hurricane? That is because they both are formed and function in ways that are similar. Similar enough so that if we align ourselves with the galaxy and the Cosmic Alignment, we align ourselves also with the forces that give rise to hurricanes. A calm as in the eye of a storm, the slowing of time as in black holes, which exist at the center of our galaxy; and brainstorms, which give rise to new ideas and solutions, are all attributed to some forms of meditation and the cosmic alignment. Come explore these ideas and more fascinating ones like it in the book. Images credited to NASA & STScI "It is my goal to present the evidence so clearly that it speaks for itself. And after you have see it, not even I will be able to say that it isn't so; the evidence itself is my credentials." CJCountess Perhaps this is one of the greatest discoveries since the theory of relativity and quantum theory. Will the scientific community be shaken again?. Seller Inventory # AAV9780595317707

Shipping: US$ 11.15
From United Kingdom to U.S.A.
Destination, rates & speeds

Shipping: US$ 9.74
From United Kingdom to U.S.A.
Destination, rates & speeds

Shipping: US$ 16.66
From United Kingdom to U.S.A.
Destination, rates & speeds

Shipping: US$ 34.84
From United Kingdom to U.S.A.
Destination, rates & speeds