Items related to Decades of Beauty: The Changing Image of Women - 1890s... 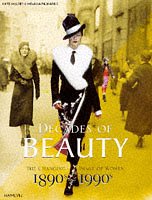 A look at the history of female beauty and how it has been perceived since the end of the Vctorian era. The text highligts the major changes in the female image over the years. Each chapter covers one decade outlining the current look at the time. Within each decade, the particular reasons for that look are then examined, such as the developments in corsetry and underwear, make-up, fabrics, hair styling and accessories. The social issues and political events that affected the way women were perceived, and the key personalities and innovators of feminine style are also outlined.

1. Decades of Beauty: The Changing Image of Women, 1890s to 1990s Mulvey, Kate and Richards, Melissa