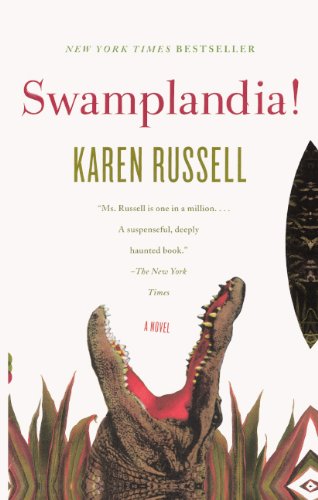 FOR USE IN SCHOOLS AND LIBRARIES ONLY. A first novel by the author of the short-story collection, St. Lucy's Home for Girls Raised by Wolves, finds the Bigtree children struggling to protect their Florida Everglades alligator-wrestling theme park from a sophisticated competitor after losing their parents. Includes reading-group guide.


Carl Hiaasen was born and raised in Florida. He is the author of twelve novels, including the bestselling Star Island, Nature Girl, Skinny Dip, Sick Puppy, and Lucky You, and three bestselling children’s books: Hoot, Flush, and Scat. He also writes a weekly column for The Miami Herald. This was the first time I’ve read Karen Russell’s work, and I was dazzled. It’s very rare, among the tonnage of manuscripts and galleys that land upon one’s desk, to come across a young novelist so inventive and versatile, yet so thoroughly in control. Also, I’m a sucker for any plot line that features man-eating reptiles. Swamplandia! is the story of Ava Bigtree, a 12-year-old alligator wrestler who embarks on an improbable journey through the mangrove wilderness of southwest Florida in search of a lost sister. Young Osceola has run off with a ghost-figure named Louis Thanksgiving, and only Ava knows where to look for them, dreading what she might find. Passages of this fine novel call to mind Conrad, Garcia Marquez and even – for those who have kids – Judy Blume. There’s not a forgettable character in the cast, from Ava’s flamboyant father, Chief Bigtree, who runs the family’s failing tourist trap, to the bedraggled and cryptic Bird Man, who guides Ava on her harrowing trip. Having spent many days in the Ten Thousand Islands, I was enchanted by Russell’s dream-like descriptions of the tangled and serpentine creeks, the funky and exotic flora, the long stare of circling buzzards. Her prose is both shimmering and stark: “A huge hole in the middle of the ceiling opened onto a clear night sky; it looked as if some great predator had peeled the thatched roof back, sniffed once and lost interest.” Or the way she describes a “cauldron” of moths with “sapphire-tipped wings, a sky-flood of them...They had fixed wings like sharp little bones, these moths, and it was astonishingly sad when you accidentally killed one.” I can’t recall the last time I came across a character who shines as brightly as Ava, or a first novel that made such a rich and lasting impression. About the Author:

Karen Russell, a native of Miami, has been featured in the New Yorker's debut fiction issue, was chosen as one of Granta's Best Young American Novelists in 2007, and was most recently named one of New Yorker magazine's 20 Under 40. Her first collection of short stories, St Lucy's Home for Girls Raised by Wolves, was longlisted for the Guardian first book award.

Book Description Turtleback Books, 2011. Condition: Good. A+ Customer service! Satisfaction Guaranteed! Book is in Used-Good condition. Pages and cover are clean and intact. Used items may not include supplementary materials such as CDs or access codes. May show signs of minor shelf wear and contain limited notes and highlighting. Seller Inventory # 0606233326-2-4