Items related to Why the Tree Loves the Ax

Lewis, Jim Why the Tree Loves the Ax

Why the Tree Loves the Ax 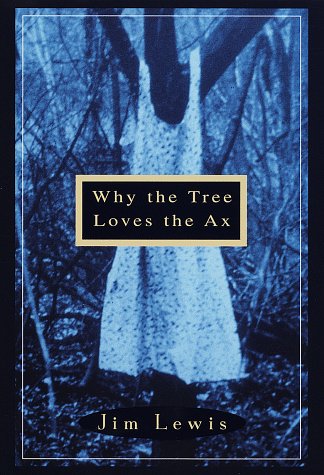 After an astounding debut with his novel Sister, Jim Lewis once again proves his remarkable talent with Why the Tree Loves the Ax.

Caroline Harrison is a young woman drifting across the country from a secret past to an uncertain future. Stranded by accident in a small Texas city, she decides to settle down and stay, only to have her peace destroyed by a moment of inspired fury. From there she's on the run, to New York City to confront her ex-husband, and then upstate, where she lands in a small house in the woods inhabited by three men and an eight-year-old boy--a tiny criminal community. But will they help her or hurt her? And what exactly are they scheming?

This is a story of female violence, fear, and resourcefulness. It is a meditation on identity and memory. Lewis's writing is deft and haunting, and the story establishes a new model for women's narrative. Why the Tree Loves the Ax is sure to put Lewis in the pantheon of important young American writers.

"I was twenty-seven years old and I had lost my way. I found myself driving on an unlit highway through the middle of a black summer night: it wasn't where I'd intended to be." In his second novel, Why the Tree Loves the Ax, Jim Lewis uses the conventions of the mystery to explore the space between what is lost and what is found. When a car accident brings Caroline Harrison to Sugartown, Texas, she is running from her past, but what she finds are the kind of secrets that simmer beneath the surface of small-town America. At first Sugartown seems like a good place to settle, and Caroline finds a home, a job, and a new, anonymous existence. Eventually, however, the creepy sense of foreboding Lewis has skillfully built in early chapters explodes in violence and Caroline is driven out of Sugartown, fleeing first to New York City and finally to upstate New York for the novel's disturbing denouement.

Why the Tree Loves the Ax is a suspense novel at heart, but when it moves toward its climax, the reader is left with the uncomfortable realization that Lewis has deftly deconstructed our notions of Caroline's role as narrator. As events unfold, it becomes clear that her past and her motives are as mysterious as those of any other character, and that the conundrums this mystery seeks to unravel are those of the soul. Lewis wraps his plot in layers of intensely poetic language--a technique that is challenging at first, but ultimately rewarding. Characters seem to exist behind a mist of imagery that keeps us at arm's length, creating a dreamily menacing atmosphere that will linger long after the final page has been turned.

Advance Praise for Why the Tree Loves the Ax

"Jim Lewis's writing possesses a luxuriant and learned beauty rarely found these days, and his sly manipulations of genre allow him to use the familiar mechanisms of a detective story to reveal both the mystery contained in his narrator's story and the subtleties contained within her psyche. Why the Tree Loves the Ax deftly combines quiet evocations with the kind of engaging plot found in thrillers. Simply put, this book has the makings of a masterpiece."
--Dale Peck

"Why the Tree Loves the Ax comes on like a speedball, in a euphoric rush of language and image. It makes you feel caught in the cross fire, everything brightly lit and blurred around the edges, and it hangs in your blood long after it ends. This is the real thing."
--Larry Clark

"A seductive debut novel . . . with a languorous pace and a taste for complexity."
--Village Voice

"We are spellbound by Lewis's scrupulously measured and charmed prose, and the inexplicable occurrences and overwhelming fecund sensuality it describes. A rare and magical interpretation of the enigma of desire and the omnipotence of the life force."
--Booklist

"Among our generation of remembered novelists."
--Interview

1. Why the Tree Loves the Ax

2. Why The Tree Loves The Ax

3. Why the Tree Loves the Ax

4. Why the Tree Loves the Ax