Items related to Suzanne Somers' Get Skinny on Fabulous Food 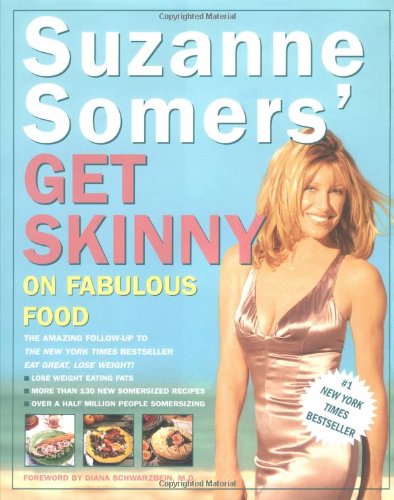 After the phenomenal success of Eat Great, Lose Weight, Suzanne Somers was flooded with letters and phone calls from people who had lost weight the "Somersize" way. They had followed Suzanne's satisfying and effective program and for the first time had gained control over their weight and their health. There was no more dieting, no more deprivation, and the pounds just seemed to melt away.

Now, Suzanne takes readers to the next step toward greater health and fitness in Suzanne Somers' Get Skinny on Fabulous Food. With breakthrough research on food and our bodies, an easy-to-follow weight-loss plan, and more than 130 amazing new Somersized recipes, this book is a must-read for anyone looking to shed pounds or maintain their weight--even while eating meat, cheese, butter, dressings, desserts, and other delicious foods not found on most eating plans. Backed up by renowned endocrinologist Dr. Diana Schwarzbein, Suzanne tells how sugar, not fat, is responsible for weight gain, and how combining food properly and eating a diet that is low in carbohydrates and that includes plenty of natural fats and proteins will not only help you lose weight but also can reprogram your metabolism, lower your cholesterol and blood pressure, and give you more energy.

Somersizing is not a diet, but  a way of life. In Get Skinny on Fabulous Food you will find inspiring testimonials from some of Suzanne's greatest success stories, people who have lost weight, lowered blood pressure, and eliminated digestive problems by Somersizing.  And you can join Suzanne and her family as they celebrate good food and good times throughout the year with dinners, brunches, and other special-occasion meals that are perfectly Somersized yet perfectly delicious. It is almost impossible to believe you can lose weight and still feel so indulged!

Best of all, Suzanne shares more than 130 new mouthwatering Somersized recipes, including Milanese Beef with Sautéed Onions and Mushrooms in a Port Wine Sauce, Spicy Rock Shrimp Salad, Fried Rice with Shiitake Mushrooms, Decadent White Chocolate Cake, and Crême Brulée. Once again, Suzanne Somers proves that you really can get, and stay, skinny on fabulous food!

"I got skinny on fat," claims Suzanne Somers. It sounds too good to be true--a weight-loss program that lets you "eat incredible, rich foods in abundant portions while the unwanted pounds effortlessly melt away." Most nutritionists would cringe at the idea that people trying to lose weight don't need to restrict their dietary fat, but Suzanne Somers and her "Somercizers" insist it works. Fat (even saturated fat) isn't the enemy, she claims--it's "products loaded with sugar, white flour, hydrogenated oils, and chemicals and preservatives that replace real fats." Get Skinny on Fabulous Food follows Somers's Eat Great, Lose Weight with a recap of the Somersize program, which involves eliminating "funky foods" like sugar and starch and using a type of food combining. Also included are grateful letters from followers of the program, menu suggestions, and 150 new recipes. Recipes include such fat-filled dishes as Leslie's Mushroom Broccoli and Egg Cupcakes (with butter, oil, Swiss cheese, and nine large eggs), Beef Stroganoff (with butter, oil, and two cups of heavy cream), Ginger Creme Brûlée (with butter, heavy cream, nine large egg yolks, and even the enemy: sugar), Cappuccino Chocolate Chunk Cheesecake (with cream cheese, eggs, chocolate, sour cream, and--yup--sugar). No calorie counts or nutritional breakdowns are included. --Joan Price

"Over the years I have been exposed to many diets for my patients, most of which eventually failed. As I grew older, I joined my overweight patients by becoming 23 pounds overweight myself. In March 1997 I started the Somersize program and in three months I lost 23 pounds and reached my goal. Since having such great success personally I have placed many patients and friends on the Somersize program. I am thoroughly convinced it is the way to go."
--Stanley Dressler, M.D.

"The more obsessed I was about finding the right diet, the larger I became--I blossomed to 407 pounds. My self-esteem diminished to the point of wondering how I could end the vicious cycle. Suzanne, little did I know the key I had prayed for was right in front of me--I wish for others to grab ahold of your words. Now 174 pounds, I have a happier heart, mind, and, most of all, body."
--Lynn Thorpe

"My husband and I slowly kept gaining weight, and before we realized, I had ballooned up to 190 pounds and Kevin was weighing in at 275. We had twin boys (3 years old) and at the time I had absolutely no energy to keep up with them. Now, 15 months later, I am 70 pounds lighter and Kevin has lost 80 pounds. This is a way of life for us now."
--Taylor and Kevin Kibodeaux

"You and your Somersizing system have made a new woman of me! I have lost 34 pounds by just eating according to your book. During menopause I started putting on weight, which was a new thing for me as I was pretty thin when I was young. My blood pressure rose until I had to be on medication, but has improved so much that I feel like a different person."
--Joan Garton

3. Get Skinny on fabulous food

Shipping: US$ 13.81
From United Kingdom to U.S.A.
Destination, rates & speeds