Items related to IBM and the Holocaust: The Strategic Alliance Between...

Black, Edwin IBM and the Holocaust: The Strategic Alliance Between Nazi Germany and America's Most Powerful Corporation

IBM and the Holocaust: The Strategic Alliance Between Nazi Germany and America's Most Powerful Corporation 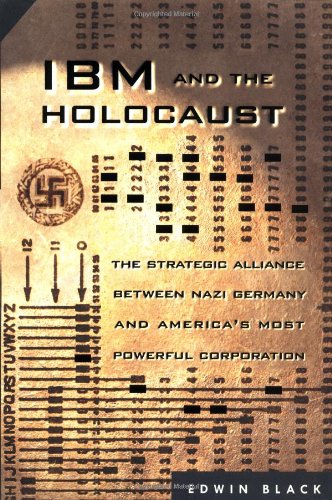 IBM and the Holocaust is the stunning story of IBM's strategic alliance with Nazi Germany -- beginning in 1933 in the first weeks that Hitler came to power and continuing well into World War II. As the Third Reich embarked upon its plan of conquest and genocide, IBM and its subsidiaries helped create enabling technologies, step-by-step, from the identification and cataloging programs of the 1930s to the selections of the 1940s.

Only after Jews were identified -- a massive and complex task that Hitler wanted done immediately -- could they be targeted for efficient asset confiscation, ghettoization, deportation, enslaved labor, and, ultimately, annihilation. It was a cross-tabulation and organizational challenge so monumental, it called for a computer. Of course, in the 1930s no computer existed.

But IBM's Hollerith punch card technology did exist. Aided by the company's custom-designed and constantly updated Hollerith systems, Hitler was able to automate his persecution of the Jews. Historians have always been amazed at the speed and accuracy with which the Nazis were able to identify and locate European Jewry. Until now, the pieces of this puzzle have never been fully assembled. The fact is, IBM technology was used to organize nearly everything in Germany and then Nazi Europe, from the identification of the Jews in censuses, registrations, and ancestral tracing programs to the running of railroads and organizing of concentration camp slave labor.

IBM and its German subsidiary custom-designed complex solutions, one by one, anticipating the Reich's needs. They did not merely sell the machines and walk away. Instead, IBM leased these machines for high fees and became the sole source of the billions of punch cards Hitler needed.

IBM and the Holocaust takes you through the carefully crafted corporate collusion with the Third Reich, as well as the structured deniability of oral agreements, undated letters, and the Geneva intermediaries -- all undertaken as the newspapers blazed with accounts of persecution and destruction.

Just as compelling is the human drama of one of our century's greatest minds, IBM founder Thomas Watson, who cooperated with the Nazis for the sake of profit.

Only with IBM's technologic assistance was Hitler able to achieve the staggering numbers of the Holocaust. Edwin Black has now uncovered one of the last great mysteries of Germany's war against the Jews -- how did Hitler get the names?

Was IBM, "The Solutions Company," partly responsible for the Final Solution? That's the question raised by Edwin Black's IBM and the Holocaust, the most controversial book on the subject since Daniel Jonah Goldhagen's Hitler's Willing Executioners. Black, a son of Holocaust survivors, is less tendentiously simplistic than Goldhagen, but his thesis is no less provocative: he argues that IBM founder Thomas Watson deserved the Merit Cross (Germany's second-highest honor) awarded him by Hitler, his second-biggest customer on earth. "IBM, primarily through its German subsidiary, made Hitler's program of Jewish destruction a technologic mission the company pursued with chilling success," writes Black. "IBM had almost single-handedly brought modern warfare into the information age [and] virtually put the 'blitz' in the krieg."

The crucial technology was a precursor to the computer, the IBM Hollerith punch card machine, which Black glimpsed on exhibit at the U.S. Holocaust Museum, inspiring his five-year, top-secret book project. The Hollerith was used to tabulate and alphabetize census data. Black says the Hollerith and its punch card data ("hole 3 signified homosexual ... hole 8 designated a Jew") was indispensable in rounding up prisoners, keeping the trains fully packed and on time, tallying the deaths, and organizing the entire war effort. Hitler's regime was fantastically, suicidally chaotic; could IBM have been the cause of its sole competence: mass-murdering civilians? Better scholars than I must sift through and appraise Black's mountainous evidence, but clearly the assessment is overdue.

The moral argument turns on one question: How much did IBM New York know about IBM Germany's work, and when? Black documents a scary game of brinksmanship orchestrated by IBM chief Watson, who walked a fine line between enraging U.S. officials and infuriating Hitler. He shamefully delayed returning the Nazi medal until forced to--and when he did return it, the Nazis almost kicked IBM and its crucial machines out of Germany. (Hitler was prone to self-defeating decisions, as demonstrated in How Hitler Could Have Won World War II.)

Black has created a must-read work of history. But it's also a fascinating business book examining the colliding influences of personality, morality, and cold strategic calculation. --Tim Appelo

"Edwin Black has given Holocaust history an extraordinary new dimension. Clearly, the destruction of six million Jewish lives, and countless non-Jews, could not have been possible without IBM's Hollerith machines. Nor could the Third Reich have perfected the roundup of Jews throughout Europe, their deportation to concentration camps, and the statistics that measured their final agonies in the Final Solution without custom-designed IBM equipment. These revelations are troubling enough, but Black has crafted a monumental history that goes beyond such horrific revelations. He has discovered the enormous corruptive power of an international enterprise that saw itself above the laws of man and God."
-- Abraham Peck, director of research, American Jewish Historical Society

"IBM and the Holocaust is a tremendous, timely work. Neglected for more than 50 years, the sordid records disclosing the global conglomerate IBM's collaboration with the Nazi regime, in pursuit of market monopoly, have now been exhumed by Edwin Black. His comprehensive and detailed account shows how the blessings of punch card technology can become a curse to human rights, as it did in enabling the Holocaust."
-- Robert Wolfe, former chief National Archives expert for captured German records and Nuremberg documentation

"In this carefully researched, yet chilling book, Edwin Black relates step-by-step how the corporate and technological zeal of IBM, and its CEO, Thomas J. Watson Sr., contributed to Nazi power and advanced the Holocaust. This book is an awesome warning for the future."
-- William Seltzer, author of Population Statistics and the Holocaust, and former director, UN Office of Statistics

1. IBM and the Holocaust: The Strategic Alliance between Nazi Germany and America&#39;s Most Powerful Corporation

2. IBM and the Holocaust: The Strategic Alliance Between Nazi Germany and America's Most Powerful Corporation