Items related to From Dawn To Decadence (Turtleback School & Library... 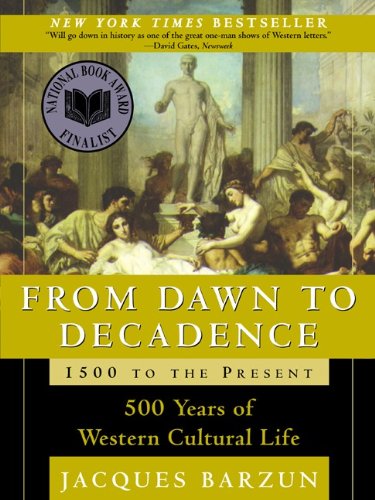 FOR USE IN SCHOOLS AND LIBRARIES ONLY. From Dawn To Decadence chronicles a detailed account of our history since 1500, from what Western Man wrought from the Renaissance and Reformation down to the present day.

In the last half-millennium, as the noted cultural critic and historian Jacques Barzun observes, great revolutions have swept the Western world. Each has brought profound change--for instance, the remaking of the commercial and social worlds wrought by the rise of Protestantism and by the decline of hereditary monarchies. And each, Barzun hints, is too little studied or appreciated today, in a time he does not hesitate to label as decadent.

To leaf through Barzun's sweeping, densely detailed but lightly written survey of the last 500 years is to ride a whirlwind of world-changing events. Barzun ponders, for instance, the tumultuous political climate of Renaissance Italy, which yielded mayhem and chaos, but also the work of Michelangelo and Leonardo--and, he adds, the scientific foundations for today's consumer culture of boom boxes and rollerblades. He considers the 16th-century varieties of religious experimentation that arose in the wake of Martin Luther's 95 theses, some of which led to the repression of individual personality, others of which might easily have come from the "Me Decade." Along the way, he offers a miniature history of the detective novel, defends Surrealism from its detractors, and derides the rise of professional sports, packing in a wealth of learned and often barbed asides.

Never shy of controversy, Barzun writes from a generally conservative position; he insists on the importance of moral values, celebrates the historical contributions of Christopher Columbus, and twits the academic practitioners of political correctness. Whether accepting of those views or not, even the most casual reader will find much that is new or little-explored in this attractive venture into cultural history. --Gregory McNamee

Jacques Barzun was born in France in 1907 and moved to the US in 1920. After graduating from Columbia University he joined its faculty as Professor of History, becoming Dean of Faculties and Provost. The author of over thirty books he received the Gold Medal for Criticism from the American Academy of Arts and Letters, of which he was twice president.

Book Description Prebound. Condition: New. Prebound. Highly regarded here and abroad for some thirty works of cultural history and criticism, master historian Jacques Barzun has now set down in one continuous narrative the sum of his discover.Shipping may be from multiple locations in the US or from the UK, depending on stock availability. 877 pages. 0.925. Seller Inventory # 9780613708500

2. From Dawn to Decadence: 500 Years of Western Cultural Life (Hardback)

Book Description Turtleback Books, United States, 2001. Hardback. Condition: New. Turtleback School & Library ed. Language: English. Brand new Book. Highly regarded here and abroad for some thirty works of cultural history and criticism, master historian Jacques Barzun has now set down in one continuous narrative the sum of his discoveries and conclusions about the whole of Western culture since 1500.In this account, Barzun describes what Western Man wrought from the Renaisance and Reformation down to the present in the double light of its own time and our pressing concerns. He introduces characters and incidents with his unusual literary style and grace, bringing to the fore those that have "Puritans as Democrats," "The Monarch's Revolution," "The Artist Prophet and Jester" -- show the recurrent role of great themes throughout the eras. The triumphs and defeats of five hundred years form an inspiring saga that modifies the current impression of one long tale of oppression by white European males. Women and their deeds are prominent, and freedom (even in sexual matters) is not an invention of the last decades. And when Barzun rates the present not as a culmination but a decline, he is in no way a prophet of doom. Instead, he shows decadence as the creative novelty that will burst forth -- tomorrow or the next day. Only after a lifetime of separate studies covering a broad territory could a writer create with such ease the synthesis displayed in this magnificent volume. Seller Inventory # AAC9780613708500

3. From Dawn to Decadence