Items related to Henry Adams and the Making of America

Wills, Garry Henry Adams and the Making of America 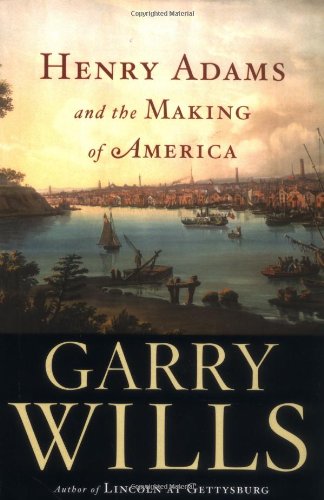 An eye-opening profile of the greatest historian of the nineteenth century assesses the seminal role and influence of Henry Adams on the study of history, discussing his use of archival sources, firsthand reportage, eyewitness accounts, and other techniques that transformed historical study and created a paradoxical view of American history that still informs modern-day policy. 60,000 first printing.

GARRY WILLS, a distinguished historian and critic, is the author of numerous books, including the Pulitzer Prize–winning Lincoln at Gettysburg, Saint Augustine, and the best-selling Why I Am a Catholic.
A regular contributor to the New York Review of Books, he has won many awards, among them two National Book Critics Circle Awards and the 1998 National Medal for the Humanities. He is a history professor emeritus at Northwestern University.

Indeed, Adams's mouthful of a title just may account in part for the History's perennial neglect, even by literate students of American history. When in 1888 Adams delivered the first six volumes, he estimated that he had spent $20,000 out of his own pocket researching U.S. and European archives. He valued his decade-long labor at an additional $60,000. The initial sales and royalties ($5,300) fell far short of retrieving his investment. That, along with the 1885 suicide of his cherished wife, Clover, may have brought on the darker mood that marked his later decades and his equally distinguished (and far more famous) autobiography, The Education of Henry Adams. As Wills observes, that later mood may explain the misconceptions that have lingered about the History from the outset.

In Part I, Wills shows how Adams prepared himself to essay a masterwork of Gibbon-esque reach -- a classic narrative history in the grand 18th- and 19th-century manner, offering a day-to-day account that simultaneously tells a story of large thematic scope about the emerging republic. He had served as his father's secretary in the U.S. mission to London during the Civil War. Before that, he had reported as a journalist (with matchless sources) during the "secession winter" of 1861. He had taught medieval history at Harvard and for six years had edited the North American Review, the most important journal of the post-Civil War period. Not least, he was the grandson and great-grandson of the Adams presidents -- and heir through them to a legacy of historical consciousness.

That family heritage, however, was also a liability that has tended to impair an accurate reading of the History, viewed by some historians and readers as an attempt to vindicate Adams's presidential ancestors and their Federalist principles. As Wills shows, this is a flagrant misconception. The fact is that Henry Adams had strong reservations about the Adams presidents. He personally disliked his formidable grandfather, John Quincy, but venerated his grandmother, Louisa Johnson Adams, who (though English-born) came of Maryland stock on her father's side and seemed a far more congenial character. Wills makes much -- perhaps a shade too much -- of Adams's self-identification with his grandmother as a sort of honorary Southerner. There can be no doubt, however, that Adams's editing of her diaries and letters contributed to his understanding of Jefferson and Madison and his grasp of what Adams calls the "Virginia" political outlook.

A big, thick pudding of a history needs a savory theme, and Adams had one. He set out to show how the United States of 1800, riven by faction and sectionalism at an important moment of transition, transformed itself under two presidencies into the thriving nation that emerged from the War of 1812. For Adams, it was a classic comedy (worthy of Beaumarchais) in which Jeffersonian ideals of minimalist government were confounded by events. The Jeffersonians, with their severely constricted notions of the proper scope of government, were thrust by fortune and a succession of remote steps (beginning with Napoleon's whimsical decision to sell Louisiana) toward a centralized and nationalist policy. Wills emphasizes, as Adams did, the role of Napoleon in American fortunes; indeed, Adams was the first major American historian to set the early story of the republic's development in its European context. Left to his own devices, Wills comments, Jefferson "would recall embassies, put the navy to sleep, get rid of all taxes but customs duties, and give himself little to do." None of it happened, much as the minimalist Jefferson might have wished; the world rudely intruded.

Henry Adams and the Making of America is original in both conception and execution. Watching one of our best historians address himself to a masterpiece of U.S. history is especially welcome at a time of gathering historical amnesia in which bad teaching from laundered textbooks has left so many of us bored by our past and ignorant of it.

That said, a few reservations. As in his previous books, Wills emerges as a quick study of whatever he sets his hand to, raking more fresh material from one book or document than drier writers do from whole library shelves. The effect is often dazzling, which is one secret of his charm as a writer. But he tends to draw from his fresh discoveries the occasionally misleading impression that he is the first to chart a given terrain. (One recalls the suggestion by Mr. Dooley, the barroom pundit with a thick brogue invented by the humorist Peter Finley Dunne, that Theodore Roosevelt's account of the Spanish-American War should be called "Alone in Cubia.") But Wills isn't always "alone in Cubia," and he certainly isn't alone in his appreciation of Adams's History. This minor irritant might be overlooked except that the compulsion to be original even when he is merely tendentious is a recurrent thread in Wills's otherwise engaging work.

"Can these people not read?" he asks in exasperation about one scholar's alleged misinterpretation of Adams's mini-biography of Randolph of Roanoke. He asks the same question of other explorers of the History. Well, yes; others can indeed read, though their responses may differ. Wills claims in this book to be retrieving the true themes of the History from the widespread misunderstanding that the work is an apologia for the Adams presidents, but he overlooks distinguished predecessors -- notably Herbert Agar and George Dangerfield -- whose grasp of the themes of the great work is hardly inferior to his own. The brighter side of the same coin is Wills's knack for illuminating neglected historical nooks and crannies, as in his celebration of the genius of Joshua Humphreys, the naval architect whose fine frigates -- six of them, built under Federalist rule before Jefferson tried to dry-dock the Navy -- were crucial to national pride and prowess in the War of 1812.

An occasional error of detail notwithstanding -- for instance, the English historian John Richard Green, Adams's friend and model, was not a medievalist, and his connection with the Oxford historical school was tenuous -- Wills achieves here a palpable hit. Writer and subject are beautifully matched. The result is a sparkling and engaging book that everyone who cares about American history should read; in its pages, they can reacquaint themselves with a masterly narrative explaining how the United States, after shaky beginnings, became a nation of consequence. And after the delicious appetizer, by all means try the main course itself: Henry Adams's nonpareil History. Nothing better of its kind has ever been written on these shores.

Henry Adams and the Making of America Wills, Garry