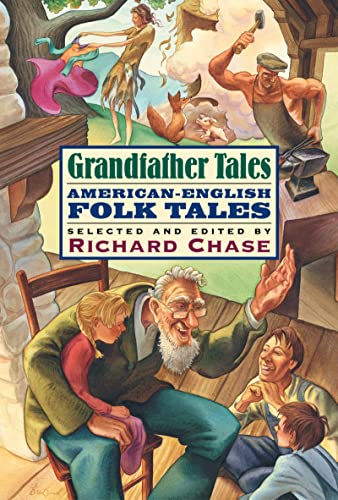 A collection of folk tales from North Carolina and Virginia for a slightly older audience than that for Chase's Jack Tales.

Richard Chase collected The Jack Tales in the mountain country of North Carolina, where they have been handed down for generations. Everyone knows the story of Jack and the Beanstalk. This book contains eighteen stories about Jack, many of them still completely new to the average reader. And what adventures Jack has! Noted American folklorist Richard Chase (1904–1988) has been called the man “most responsible for the renaissance of Appalachian storytelling.” A collector of tales that had been handed down from generation to generation in the Appalachian regions of the United States, Chase was born in Alabama and lived in the mountains of North Carolina.

"The collector of the Jack Tales has brought new joy to children and storytellers in these twenty-four tales and a mummer's play . . . richly humorous. Colorful mountain speech comes to life." School Library Journal, Starred

Book Description Paperback. Condition: New. 1st. Paperback. The only people who can tell these stories better than Richard Chase are the folks in North Carolina and Virginia who told them to him.These stories have been handed down for generations a.Shipping may be from multiple locations in the US or from the UK, depending on stock availability. 222 pages. 0.295. Seller Inventory # 9780618346905