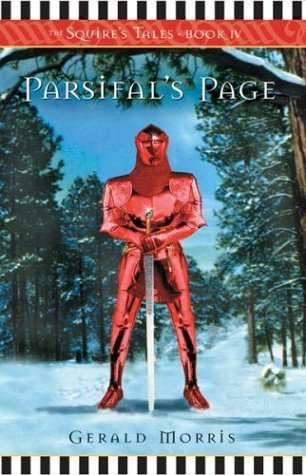 In medieval England, eleven-year-old Piers's dream comes true when he becomes page to Parsifal, a peasant whose quest for knighthood reveals important secrets about both of their families. Reprint.

When Gerald Morris was in fifth grade he loved Greek and Norse mythology and before long was retelling the stories to his younger sister and then to neighborhood kids. He began carrying a notebook in which he kept some of the details related to the different stories. The joy he found in retelling those myths continued when he discovered other stories.

According to Gerald Morris, “I never lost my love of retelling the old stories. When I found Arthurian literature, years later, I knew at once that I wanted to retell those grand tales. So I pulled out my notebook . . . I retell the tales, peopling them with characters that I at least find easier to recognize, and let the magic of the Arthurian tradition go where it will.”

Gerald Morris lives in Wausau, Wisconsin, with his wife and their three children. In addition to writing he serves as a minister in a church.

Gr 5-8-As he did in The Squire's Tale (Houghton, 1998), the author retells a knight's legend from the perspective of his helper and companion. In this entertaining and substantive story, Piers's wanderlust takes him to the court of King Arthur where he meets up with a lost soul, Parsifal, who longs to be a knight. Piers's mother has regaled him with stories of her life as a maid-in-waiting at the French court, so he has grown up with lofty ideas and the ambition to become a knight's page. Parsifal is clearly in need of his expertise. Readers familiar with the legend will recognize the main events. After Parsifal fails to ask "the" question and realizes his mistake, he continues his Grail quest alone, and Piers joins Sir Gawain and his page on further adventures, thus continuing the story begun in The Squire's Tale. Piers's overly earnest attempts to do the right thing and Gawain's wit provide most of the humor in the story, but the author avoids cheapening the significance of the Grail quest. Readers unfamiliar with Parsifal and Gawain's stories may wish for a "who's who" to keep up with the characters, but the sheer fun of this novel will keep them going. Unfortunately, the cover art looks like a video game and doesn't fit the story. Once past it, Arthurian fans will be hooked by the great writing. Katherine Paterson's Parzival (Dutton, 1998) is a more traditional retelling that would appeal to similar readers.-Cheri Estes, Detroit Country Day School Middle School, Beverly Hills, MI