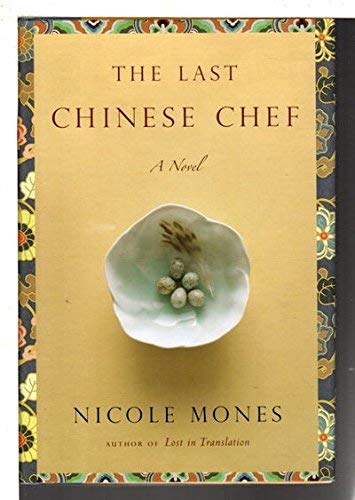 Struggling to get back on her feet in the wake of her husband's premature death and stunned by a paternity suit against her husband's estate, food writer Maggie McElroy plans a trip to China to investigate the claim and to profile rising chef Sam Liang, who introduces her to the Chinese concept of food, while drawing her into his extended family and helping her come to terms with her life. 30,000 first printing.

Nicole Mones has mined the endless riches of China once again in The Last Chinese Chef. This time she hits the trifecta: the personal stories of Sam and Maggie, the history and lore of Chinese cuisine, and an inside look at cultural dislocation. Maggie McElroy is a widowed American food writer who is suddenly confronted with a paternity claim against her late husband's estate--by a Chinese family. Her editor offers her another reason to go to Beijing: write an article about a rising young Chinese-American-Jewish chef, Sam Liang. Having sold the home she had with her late husband Matt and reduced her possessions to only the barest necessities, with her life feeling as though it is contracting around her, Maggie embraces the oppportunity to sort out her feelings about Matt's supposed infidelity and do some work at the same time.

She and Sam hit it off right away, even though he is involved in a very important competition for a place on the Chinese national cooking team for the 2008 Olympics. They travel together to the south of China where she meets her husband's possible daughter--with Sam standing by to act as translator--and where Maggie meets much of Sam's family. He has been welcomed back with open arms, even though he occasionally feels that he has one foot in China and one in Ohio. The Beijing uncles and the Hangzhou uncle are a raucous, loving, argumentative bunch of foodies who advise Sam about menus, encourage a romance with Maggie, make him start over again when the dish isn't perfect, and alternately praise and criticize his cooking.

Maggie loves being in the middle of it all and finds herself more and more drawn to Sam. She begins, with Sam's help, to see food as "healing" and understands the guanxi or "connectedness" that takes place around food. At the beginning of each chapter is a paragraph taken from a book entitled The Last Chinese Chef, written by Sam's grandfather and translated by Sam and his father. Mones has written that book, too, which is an explanation of the place of food in Chinese history and family life. The novel is rich with meaning and lore and an examination of loving relationships. Don't even touch this book when you're hungry. The descriptions make the aromas and textures float right off the page. --Valerie Ryan

Nicole Mones is a contributor for Houghton Mifflin titles including 'The Last Chinese Chef.'