Items related to American Boy: The Adventures of Mark Twain 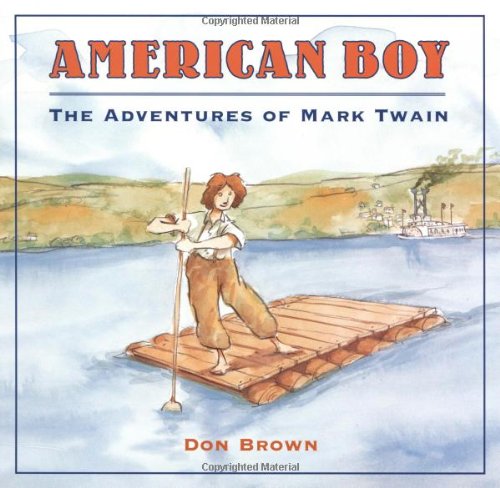 But once upon a time, Mark Twain was a boy named Samuel Clemens. His birth on November 30, 1835, coincided with the appearance of Halley’s comet, streaking across the sky. A dreamer, a prankster, a lover of great tales, Sam Clemens spent his boyhood years living out adventures on the banks of the mighty Mississippi River.

Don Brown is the award-winning author and illustrator of many picture book biographies. He has been widely praised for his resonant storytelling and his delicate watercolor paintings that evoke the excitement, humor, pain, and joy of lives lived with passion. School Library Journal has called him “a current pacesetter who has put the finishing touches on the standards for storyographies.” He lives in New York with his family.

Grade 2-6-Brown continues to apply his understated humor and muted watercolors to larger-than-life personalities in picture-book biographies. This portrayal of Samuel Clemens opens with a forbidden nocturnal ice-skating escapade, a disclaimer, and a justification. Brown frames the foolishness, but lets his subject have the last flippant word. These quoted phrases pepper the text, enhancing the flavor. In covering Clemens's childhood, Brown manages to slip in facts while elaborating on moments and realities that shaped the storyteller-his risking health and safety for adventure, soaking in the tales of his mother and "Uncle Dan'l" (a slave), serving as a printer's apprentice, and writing for newspapers. Double-page paintings of the haunted cave, the mighty river, and the night sky heighten the drama as they pit the plucky boy against his world. Brown uses light, color, and clarity of detail to draw focus to his protagonist in subtle, but effective ways. Adults will recognize the characters and settings that inspired Clemens's fiction; some of these connections are spelled out for children. A brief note touches on the acclaim and disdain surrounding the writer's work. Cheryl Harness's Mark Twain and the Queens of the Mississippi (S & S, 1998) ties the man's destiny to the river's. William Anderson's River Boy (HarperCollins, 2003) devotes more space to Clemens's adult life, and the art is more painterly. Brown's engaging text packs more punch and provides an entertaining introduction to an American legend.
Wendy Lukehart, Washington DC Public Library
Copyright 2003 Reed Business Information, Inc.

2. AMERICAN BOY: THE ADVENTURES OF