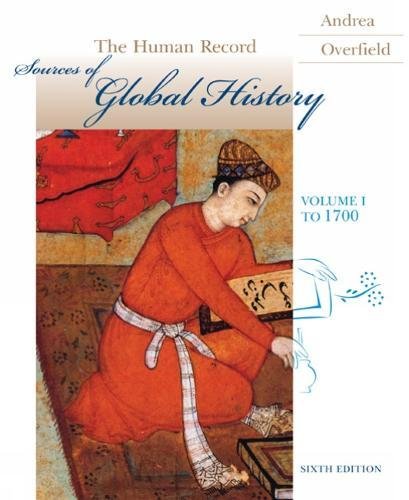 Now in its Sixth Edition, The Human Record continues to be the leading primary source reader for the World History course. Each volume contains a blend of visual and textual sources; these sources are often paired or grouped together for comparison. A prologue entitled, "Primary Sources and How to Read Them," appears in each volume and serves as a valuable pedagogical tool. Unlike many world history texts that center on the West, The Human Record provides balanced coverage of the global past. Approximately one-third of the sources in the Sixth Edition are new, and these documents continue to reflect the myriad experiences of the peoples of the world.

Alfred Andrea received his Ph.D. from Cornell University. He is Professor Emeritus of History at the University of Vermont, where he taught from 1967 through 2001. His initial training concentrated on medieval European history, with an emphasis on Byzantine-Western relations and the Crusades. He has since published four books on the Crusades, as well as numerous articles on a variety of historical issues. For the past thirty years, his teaching, research, and writing have focused increasingly on world history before 1600, with a particular interest in cross-cultural contacts across the Silk Road. In 2002 he was Distinguished Scholar-in-Residence at the University of Louisville, and he served as president of the World History Association (WHA) in 2010-2012. In 2014, the WHA recognized him as a Pioneer of World History.

James H. Overfield, Professor Emeritus at the University of Vermont, received his BA from Dension University, his MA from the University of Chicago, and his PhD from Princeton University. During his career at Vermont he received the University's outstanding teacher award, and served many years as Department of History Chair, in which capacity he was a strong advocate for the study and teaching of global history. His publications include Humanism and Scholasticism in Late Medieval Germany (Princeton University Press, 1984), as well as numerous articles on late medieval and early modern European thought. He served as editor for three volumes (1750-1914) of the ABC-CLIO World History Encyclopedia and is author of Sources of Global History since 1900 (Cengage: 2013).