Items related to The Children of Hurin

Tolkien, J.R.R. The Children of Hurin

The Children of Hurin 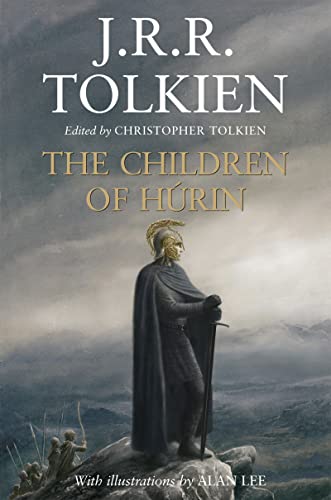 The first complete book by J.R.R. Tolkien in three decades--since the publication of The Silmarillion in 1977--The Children of Húrin reunites fans of The Hobbit and The Lord of the Rings with Elves and Men, dragons and Dwarves, Eagles and Orcs. Presented for the first time as a complete, standalone story, this stirring narrative will appeal to casual fans and expert readers alike, returning them to the rich landscape and characters unique to Tolkien.

Adam Tolkien on The Children of Húrin

How did a lifetime of stories become The Children of Húrin? In an essay on the making of the book, Adam Tolkien, grandson of J.R.R. Tolkien (and French translator of his History of Middle-earth), explains that the Húrin legends made up the third "Great Tale" of his grandfather's Middle-earth writing, and he describes how his father, Christopher Tolkien, painstakingly collected the pieces of the legend into a complete story told only in the words of J.R.R. Tolkien. "For anyone who has read The Hobbit and The Lord of the Rings," he writes, The Children of Húrin "allows them to take a step back into a larger world, an ancient land of heroes and vagabonds, honour and jeopardy, hope and tragedy."

A Look Inside the Book

This first edition of The Children of Húrin is illustrated by Alan Lee, who was already well-known for his Tolkien illustrations in previous editions (see our Tolkien Store for more) as well as his classic collaboration with Brian Froud, Faeries, and his Kate Greenaway Medal-winning Black Ships Before Troy, before his Oscar-winning work as conceptual designer for Peter Jackson's Lord of the Rings film trilogy brought him even greater acclaim. Here's a quick glimpse of two of Lee's interior illustrations for The Children of Húrin. (Click on each to see larger images.)

We had the chance to ask Alan Lee a few questions about his illustrative collaboration with the world imagined by J.R.R. Tolkien:

Amazon.com: How much of a treat was it to get first crack at depicting entirely new characters rather than ones who had been interpreted many times before? Was there one who particularly captured your imagination?

Lee: Although it was a great honor to illustrate The Children of Húrin, the characters and the main elements of the story line are familiar to those who have read The Silmarillion and Unfinished Tales, and these narratives have inspired quite a few illustrators. Ted Nasmith has illustrated The Silmarillion and touched on some of the same characters and landscapes. This was the first time that I ventured into the First Age; while working on The Lord of the Rings books and films--and The Hobbit--I've had to refer back to events in Middle-earth history but not really depict them.

I'm drawn to characters who bear similarities to the protagonists in myths and legends; these correspondences add layers and shades of meaning, and most of the characters in this story have those archetypal qualities. However, I prefer not to get too close to the characters because the author is delineating them much more carefully than I can, and I'm wary of interfering with the pictures that the text is creating in the reader's mind.

Amazon.com: The Húrin story has been described as darker than some of Tolkien's other work. What mood did you try to set with your illustrations?

Lee: It is a tragic story, but the darkness is offset by the light and beauty of Tolkien's elegiac writing. In the illustrations I tried to show some of the fragile beauty of the landscapes and create an atmosphere that would enhance the sense of foreboding and impending loss. I try to get the setting to tell its part in the story, as evidence of what happened there in the past and as a hint at what is going to occur. My usual scarred and broken trees came in handy.

Amazon.com: You were a conceptual designer (and won an Oscar) for Peter Jackson's film trilogy of The Lord of the Rings, which I think we can safely say had a bit of success. How does designing for the screen compare to designing for the page?

Lee: They both have their share of joys and frustrations. It was great to be part of a huge film collaboration and play a small part in something quite magical and monumental; I will always treasure that experience. Film is attractive because I enjoy sketching and coming up with ideas more than producing highly finished artwork, and it's great having several hundred other people lending a hand! But books--as long as they don't get moldy from being left in an empty studio for six years--have their own special quality. I hope that I can continue doing both.

Amazon.com: Of all fiction genres, fantasy seems to have the strongest tradition of illustration. Why do you think that is? Who are some of your favorite illustrators?

Lee: A lot of excellent illustrators are working at the moment--especially in fantasy and children's books. It is exciting also to see graphic artists such as Dave McKean, in his film Mirrormask, moving between different media. I also greatly admire the more traditional work of Gennady Spirin and Roberto Innocenti. Kinuko Craft, John Jude Palencar, John Howe, Charles Vess, Brian Froud ... I'll stop there, as the list would get too long. But--in a fit of pride and justified nepotism--I'll add my daughter, Virginia Lee, to the list. Her first illustrated children's book, The Frog Bride [coming out in the U.K. in September], will be lovely.

Visit our J.R.R. Tolkien Store for a complete selection of Tolkien classics, including deluxe editions, young readers' editions, and more.

J.R.R. TOLKIEN (1892–1973) is the creator of Middle-earth and author of such classic and extraordinary works of fiction as The Hobbit, The Lord of the Rings, and The Silmarillion. His books have been translated into more than fifty languages and have sold many millions of copies worldwide.

CHRISTOPHER TOLKIEN is the third son of J.R.R. Tolkien. Appointed by Tolkien to be his literary executor, he has devoted himself to the editing and publication of unpublished writings, notably The Silmarillion, Unfinished Tales, and The History of Middle-earth.

1. The Children of Hurin

2. The Children of Hurin

3. The Children of Hurin

4. The Children of Hurin

5. The Children of Hurin

6. The Children of Hurin

7. The Children of Hurin

8. The Children of Hurin

9. The Children of Hurin

10. The Children of Hurin