Items related to A Companion to Plato's Republic

A Companion to Plato's Republic 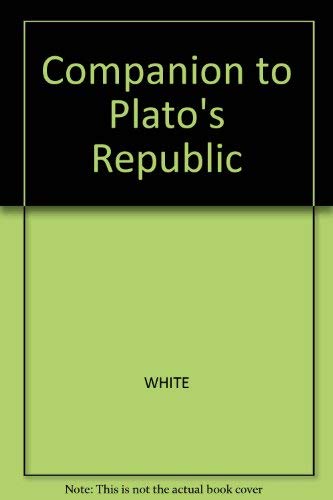 A step by step, passage by passage analysis of the complete Republic. White shows how the argument of the book is articulated, the important interconnections among its elements, and the coherent and carefully developed train of though which motivates its complex philosophical reasoning. In his extensive introduction, White describes Plato's aims, introduces the argument, and discusses the major philosophical and ethical theories embodied in the Republic. He then summarizes each of its ten books and provides substantial explanatory and interpretive notes.

Buy Used
Condition: Good
Ships from the UK. Used book that... Learn more about this copy

Book Description Condition: Good. Ships from the UK. Used book that is in clean, average condition without any missing pages. Seller Inventory # 18387908-20

2. A Companion to Plato's Republic

Shipping: US$ 11.83
From United Kingdom to U.S.A.
Destination, rates & speeds

Book Description Condition: Poor. This is an ex-library book and may have the usual library/used-book markings inside.This book has hardback covers. In poor condition, suitable as a reading copy. Dust Jacket in fair condition. Please note the Image in this listing is a stock photo and may not match the covers of the actual item,650grams, ISBN:0631107819. Seller Inventory # 6685375

Shipping: US$ 19.32
From United Kingdom to U.S.A.
Destination, rates & speeds

Shipping: US$ 29.23
From United Kingdom to U.S.A.
Destination, rates & speeds

5. A Companion to Plato's Republic.

Book Description Condition: Antiquarian. Basil Blackwell, Oxford, 1979. VIII,275p. Paperback. Spine with light reading trace. Upper and lower edge back cover and last pages a bit bumped. Signature on half title. ?Professor White?s book, which (apart from a long Introduction) takes the form of a continuous summary of and commentary on the ?Republic?, has two aims. One is to provide an introduction which can be used by students with varying levels of background knowledge and philosophical sophistication. The other is to put forward his own interpretation of the work as a closely articulated unity which is pine of the wide range of Plato?s concerns forms a single argument. The two aims harmonise well. As a ?companion? for those reading the ?Republic? for the first time, the book gains from the fact that W. Is concerned to let Plato?s argument speak for itself rather than focussing on the work through a set of modern philosophical concerns. In his comments W. Refers to the secondary literature, but does not often directly take issue with it; the form and scope of his discussion always follows the text rather closely. (?) W. Sees the ?Republic? primarily as a work of moral (and political) philosophy, putting less stress on the epistemology and metaphysics. (?) The basis of W.?s overall interpretation is sketched in the Introduction: by making goodness the primary notion in ethics, and insisting on its objectivity, Plato avoids the unanswerable problems that arise for those who see morality in terms of the conflict of duty and interest; hence he is neither an egoist nor a utilitarian. W. Is importantly right here, and his book will, I hope, help to free students from the tendency to interpret Plato in modern ethical terms that condemn the Republic?s argument to failure before it begins. (?) The book as a whole is far superior, philosophically and in its approach to Plato, to other recent introductions. It will be useful to students and of interest to the specialist.? (JULIA ANNAS in The Journal of Hellenic Studies 1981, p.154). Antiquarian. Seller Inventory # 58028

Shipping: US$ 26.71
From Netherlands to U.S.A.
Destination, rates & speeds