Items related to The Life of W. B. Yeats: A Critical Biography (Wiley... 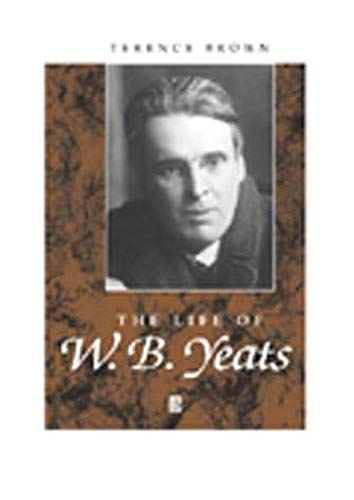 W. B. Yeats is widely regarded as the greatest English-language poet of the twentieth century. This new critical biography seeks to tell the story of his life as it unfolded in the various contexts in which Yeats worked as an artist and as public figure.

At this point in literary history, any biographer of W.B. Yeats is up against some stiff competition. Most of the late Richard Ellmann's work on the poet is, alas, out of print. But to judge from its first installment, R.F. Foster's double-decker life looks to be a monumental accomplishment, while in the recent Yeats' Ghosts, Brenda Maddox casts a cold (and discerning) eye over her subject's erotic life and supernatural predilections. Now comes The Life of W.B. Yeats by the Irish scholar Terence Brown. His book is very much a critical biography, attending more to the perfection of art than the perfection of life (while gracefully conceding that neither in fact exists). So there's relatively little frolicking around in the poet's boudoir ŕ la Maddox. Still, Brown has a gift for conveying the texture of Yeats's life, selecting just the right details from what is now a copious historical record. Here he delivers a fine snapshot of the poet paying court to chain smoker Iseult Gonne after having been spurned by her notorious mommy:

In August 1917 Yeats had visited Maud and Iseult Gonne in Normandy where he renewed his suit for Iseult's hand. She was moody, sickly from over-indulgence in cigarettes, flirtatiously affectionate but no more inclined to marry Yeats than she had been the previous summer. Her mother he found surrounded by the usual menagerie which included a laughing parrot whose forte was peals of hysterical laughter.

Still, Brown is strongest on the poetry itself, which he methodically mines for fresh insights. And he's refreshingly open to scolding his subject when he falls short of his own gargantuan talents (even Responsibilities, which most Yeatsians consider a breakthrough into the poet's major, post-Celtic Twilight phase, gets some flack from Brown: "The several poems in which Yeats celebrates Irish beggary as a metaphor of the spiritual freedom the Irish materially minded moneyed class so signally lacks, are without purchase on much beyond the literary salon's version of mendicancy"). There are times, to be sure, when the author's prose bogs down a bit, and he's hardly aided by the publisher's eyeball-punishing type size. Yet Brown's Life of W.B. Yeats remains an enlightening account of how one Irish poet in particular did learn his trade--to a degree that most of his fellows are still struggling to match. --Ingrid Broun Book Description:

This biography considers the career of W.B. Yeats in the late Victorian world of London, a career involving a deep commitment to the life of an emergent Ireland in the twentieth century. It addresses the disillusionment & alienation from the modern world that made Yeats one of the major figures of the Modernidst movement.

The Life of W. B. Yeats (Blackwell Critical Biographies)

Shipping: US$ 18.32
From United Kingdom to U.S.A.
Destination, rates & speeds