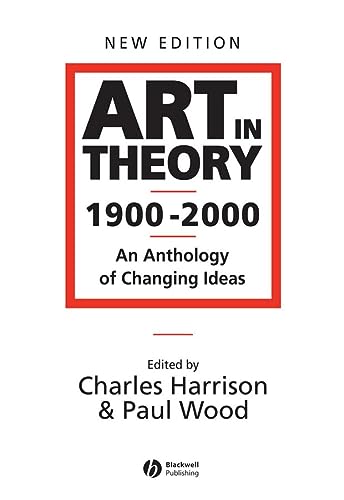 This popular anthology of twentieth-century art theoretical texts has now been expanded to take account of new research, and to include significant contributions to art theory from the 1990s.

Since it was first published in 1992, this book has become one of the leading anthologies of art theoretical texts in the English-speaking world. This expanded edition includes the fruits of recent research, involving a considerable amount of newly-translated material from the entire period, together with additional texts from the last decades of the twentieth century. The features that made the first edition so successful have been retained: The volume provides comprehensive representation of the theories which underpinned developments in the visual arts during the twentieth century. As well as writings by artists, the anthology includes texts by critics, philosophers, politicians, and literary figures. The content is clearly structured into eight broadly chronological sections, starting with the legacy of symbolism and concluding with contemporary debates about the postmodern. The editors provide individual introductions to each of the 371 anthologized texts. Material new to this expanded edition includes texts on African art, on the Bauhaus and on the re-emergent avant-gardes of the period after the Second World War. Post-modernist debates are amplified by texts on gender, on installation and performance art, and on the increasing globalization of culture.

Charles Harrison is Professor of History and Theory of Art and Staff Tutor in Arts at the Open University. He is the author of numerous books on modern art criticism and art theory.

Book Description Paperback. Condition: New. 2nd Edition. Language: English. Brand new Book. This popular anthology of twentieth-century art theoretical texts has now been expanded to take account of new research, and to include significant contributions to art theory from the 1990s.* New edition of this popular anthology of twentieth-century art-theoretical texts.* Now updated to include the results of new research, together with significant contributions from the 1990s.* Includes writings by critics, philosophers, politicians and literary figures.* The editors provide contextual introductions to 340 texts.* Complements Art in Theory 1648-1815 and Art in Theory 1815-1900 to create a complete survey of the theories underpinning the development of art in the modern period. Seller Inventory # AAZ9780631227083

Shipping: US$ 18.49
From United Kingdom to U.S.A.
Destination, rates & speeds