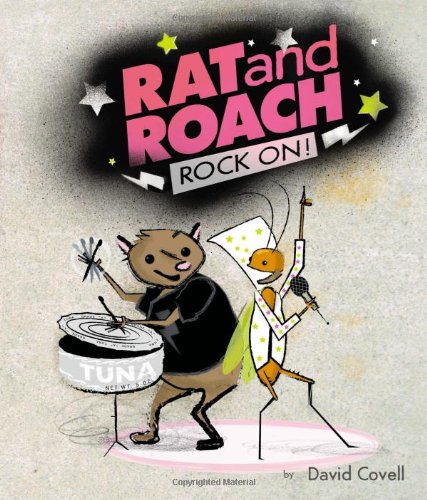 Rat has finally agreed to let his friend Roach sing in his band... but not if Roach makes everyone wear shiny, sparkly outfits. No way! Roach can still sing, though, right?
Wrong. He can't even get out a squeak!

Just when Rat is at his tail’s end, he realizes that one thing might bring the sparkle and shine back to Roach's voice. Rat may look a little funny in his glitzy new outfit, but sometimes friendship is totally worth it.

With just the right touch of silly and sweet, Rat and Roach Rock On! gets at the heart of friendship and makes us laugh along the way.

David Covell grew up in Maine, worked in Vermont, and moved to New York. He's not quite Rat, and not quite Roach, but he's known them both. He lives in New York City.

Praise for Rat and Roach Rock On! by David Covell:

"In this sequel to Rat and Roach Friends to the End (Viking, 2012), Covell demonstrates the value of compromise." —School Library Journal