Items related to The Book of Life (All Souls)

Harkness, Deborah The Book of Life (All Souls) 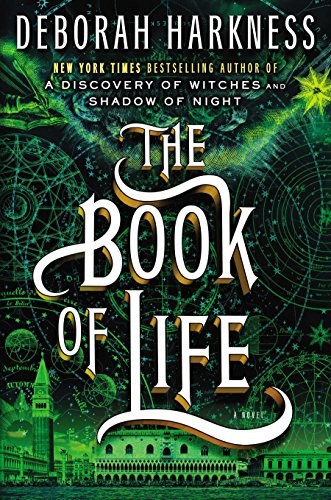 The #1 New York Times bestselling series finale and sequel to A Discovery of Witches and Shadow of Night.

Look for the hit TV series “A Discovery of Witches” airing Sundays on AMC and BBC America, and streaming on Sundance Now and Shudder.

After traveling through time in Shadow of Night, the second book in Deborah Harkness’s enchanting series, historian and witch Diana Bishop and vampire scientist Matthew Clairmont return to the present to face new crises and old enemies. At Matthew’s ancestral home at Sept-Tours, they reunite with the cast of characters from A Discovery of Witches—with one significant exception. But the real threat to their future has yet to be revealed, and when it is, the search for Ashmole 782 and its missing pages takes on even more urgency. In the trilogy’s final volume, Harkness deepens her themes of power and passion, family and caring, past deeds and their present consequences. In ancestral homes and university laboratories, using ancient knowledge and modern science, from the hills of the Auvergne to the palaces of Venice and beyond, the couple at last learn what the witches discovered so many centuries ago.

With more than one million copies sold in the United States and appearing in thirty-eight foreign editions, A Discovery of Witches and Shadow of Night have landed on all of the major bestseller lists and garnered rave reviews from countless publications. Eagerly awaited by Harkness’s legion of fans, The Book of Life brings this superbly written series to a deeply satisfying close.

Deborah Harkness is the number one New York Times bestselling author of A Discovery of Witches and Shadow of Night. A history professor at the University of Southern California, Harkness has received Fulbright, Guggenheim, and National Humanities Center fellowships. She lives in Los Angeles.

The signe of the Crabbe pertains to houses, lands, treasures, and whatever is hidden. It is the fourth house of the Zodiak. It signifies death and the end of thinges.

Ghosts didn’t have much substance. All they were composed of was memories and heart. Atop one of Sept-Tours’ round towers, Emily Mather pressed a diaphanous hand against the spot in the center of her chest that even now was heavy with dread.

Does it ever get easier? Her voice, like the rest of her, was almost imperceptible. The watching? The waiting? The knowing?

Not that I’ve noticed, Philippe de Clermont replied shortly. He was perched nearby, studying his own transparent fingers. Of all the things Philippe disliked about being dead—the inability to touch his wife, Ysabeau; his lack of smell or taste; the fact that he had no muscles for a good sparring match—invisibility topped the list. It was a constant reminder of how inconsequential he had become.

Emily’s face fell, and Philippe silently cursed himself. Since she’d died, the witch had been his constant companion, cutting his loneliness in two. What was he thinking, barking at her as if she were a servant?

Perhaps it will be easier when they don’t need us anymore, Philippe said in a gentler tone. He might be the more experienced ghost, but it was Emily who understood the metaphysics of their situation. What the witch had told him went against everything Philippe believed about the afterworld. He thought the living saw the dead because they needed something from them: assistance, forgiveness, retribution. Emily insisted these were nothing more than human myths, and it was only when the living moved on and let go that the dead could appear to them.

This information made Ysabeau’s failure to notice him somewhat easier to bear, but not much.

“I can’t wait to see Em’s reaction. She’s going to be so surprised.” Diana’s warm alto floated up to the battlements.

Diana and Matthew, Emily and Philippe said in unison, peering down to the cobbled courtyard that surrounded the château.

There, Philippe said, pointing at the drive. Even dead, he had vampire sight that was sharper than any human’s. He was also still handsomer than any man had a right to be, with his broad shoulders and devilish grin. He turned the latter on Emily, who couldn’t help grinning back. They are a fine couple, are they not? Look how much my son has changed.

Vampires weren’t supposed to be altered by the passing of time, and therefore Emily expected to see the same black hair, so dark it glinted blue; the same mutable gray-green eyes, cool and remote as a winter sea; the same pale skin and wide mouth. There were a few subtle differences, though, as Philippe suggested. Matthew’s hair was shorter, and he had a beard that made him look even more dangerous, like a pirate. She gasped.

He is. I fattened him up when he and Diana were here in 1590. Books were making him soft. Matthew needed to fight more and read less. Philippe had always contended there was such a thing as too much education. Matthew was living proof of it.

Diana looks different, too. More like her mother, with that long, coppery hair, Em said, acknowledging the most obvious change in her niece.

Diana stumbled on a cobblestone, and Matthew’s hand shot out to steady her. Once, Emily had seen Matthew’s incessant hovering as a sign of vampire overprotectiveness. Now, with the perspicacity of a ghost, she realized that this tendency stemmed from his preternatural awareness of every change in Diana’s expression, every shift of mood, every sign of fatigue or hunger. Today, however, Matthew’s concern seemed even more focused and acute.

It’s not just Diana’s hair that has changed. Philippe’s face had a look of wonder. Diana is with child—Matthew’s child.

Emily examined her niece more carefully, using the enhanced grasp of truth that death afforded. Philippe was right—in part. You mean “with children.” Diana is having twins.

Twins, Philippe said in an awed voice. He looked away, distracted by the appearance of his wife. Look, here are Ysabeau and Sarah with Sophie and Margaret.

What will happen now, Philippe? Emily asked, her heart growing heavier with anticipation.

That is because Diana is afraid of what she must become, Philippe replied.

Marcus Whitmore had faced horrors aplenty since the night in 1781 when Matthew de Clermont made him a vampire. None had prepared him for today’s ordeal: telling Diana Bishop that her beloved aunt, Emily Mather, was dead.

Marcus had received the phone call from Ysabeau while he and Nathaniel Wilson were watching the television news in the family library. Sophie, Nathaniel’s wife, and their baby, Margaret, were dozing on a nearby sofa.

“The temple,” Ysabeau had said breathlessly, her tone frantic. “Come. At once.”

Marcus had obeyed his grandmother without question, only taking time to shout for his cousin, Gallowglass, and his Aunt Verin on his way out the door.

The summer half-light of evening had lightened further as he approached the clearing at the top of the mountain, brightened by the otherworldly power that Marcus glimpsed through the trees. His hair stood at attention at the magic in the air.

Then he scented the presence of a vampire, Gerbert of Aurillac. And someone else—a witch.

A light, purposeful step sounded down the stone corridor, drawing Marcus out of the past and back into the present. The heavy door opened, creaking as it always did.

“Hello, sweetheart.” Marcus turned from the view of the Auvergne countryside and drew a deep breath. Phoebe Taylor’s scent reminded him of the thicket of lilac bushes that had grown outside the red-painted door of his family’s farm. Delicate and resolute, the fragrance had symbolized the hope of spring after a long Massachusetts winter and conjured up his long-dead mother’s understanding smile. Now it only made Marcus think of the petite, iron-willed woman before him.

“Everything will be all right.” Phoebe reached up and straightened his collar, her olive eyes full of concern. Marcus had taken to wearing more formal clothes than concert T-shirts around the same time he’d started to sign his letters Marcus de Clermont instead of Marcus Whitmore—the name she’d first known him by, before he had told her about vampires, fifteen-hundred-year-old fathers, French castles full of forbidding relatives, and a witch named Diana Bishop. It was, in Marcus’s opinion, nothing short of miraculous that Phoebe had remained at his side.

“No. It won’t.” He caught one of her hands and planted a kiss on the palm. Phoebe didn’t know Matthew. “Stay here with Nathaniel and the rest of them. Please.”

“For the final time, Marcus Whitmore, I will be standing beside you when you greet your father and his wife. I don’t believe we need discuss it further.” Phoebe held out her hand. “Shall we?”

Marcus put his hand in Phoebe’s, but instead of following her out the door as she expected, he tugged her toward him. Phoebe came to rest against his chest, one hand clasped in his and the other pressed to his heart. She looked at him with surprise.

“Very well. But if you come down with me, Phoebe, there are conditions. First, you are with me or with Ysabeau at all times.”

Phoebe opened her mouth to protest, but Marcus’s serious look silenced her.

“Second, if I tell you to leave the room, you will do so. No delay. No questions. Go straight to Fernando. He’ll be in the chapel or the kitchen.” Marcus searched her face and saw a wary acceptance. “Third, do not, under any circumstances, get within arm’s reach of my father. Agreed?”

Phoebe nodded. Like any good diplomat, she was prepared to follow Marcus’s rules—for now. But if Marcus’s father was the monster some in the house seemed to think he was, Phoebe would do what she must.

Book Description Condition: New. This is a brand new book! Fast Shipping - Safe and Secure Mailer - Our goal is to deliver a better item than what you are hoping for! If not we will make it right!. Seller Inventory # 1XGOUS0004EU_ns

The Book of Life (All Souls) Hardcover