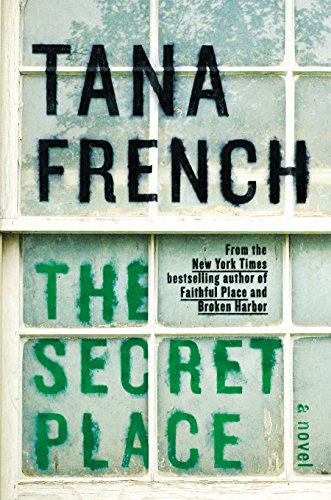 Read the New York Times bestseller by Tana French, “the most interesting, most important crime novelist to emerge in the past 10 years” (The Washington Post)--and don't miss her newest, The Trespasser, now available

In this "dizzyingly addictive"* novel, Detective Stephen Moran has been waiting for his chance to join Dublin’s Murder Squad when sixteen-year-old Holly Mackey arrives in his office with a photo of a popular boy whose body was found at a girls’ boarding school a year earlier. The photo had been posted at “The Secret Place,” the school’s anonymous gossip board, and the caption says “I KNOW WHO KILLED HIM.” Stephen joins with Detective Antoinette Conway to reopen the case—beneath the watchful eye of Holly’s father, fellow detective Frank Mackey. With the clues leading back to Holly’s close-knit group of friends, to their rival clique, and to the tangle of relationships that bound them all to the murdered boy, the private underworld of teenage girls turns out to be more mysterious and more dangerous than the detectives imagined.

An Amazon Best Book of the Month, September 2014: A fallow murder investigation is resuscitated when Holly Mackey (daughter of Frank Mackey, both last seen in Faithful Place) brings Detective Stephen Moran (Mackey’s protege in Faithful Place) a fresh clue she’s discovered at her posh girls’ school where the murder took place. Hoping this is his chance to trade Cold Cases for the Dublin Murder Squad and revive his own career, Moran finagles himself a partnership with prickly lead cop Antoinette Conway. Together the detectives try to find the truth inside the secrets, loyalties, and misdirection thrown their way by two rival groups of teenage schoolgirls. As in her previous books, just when you think you’ve solved the mystery another curious twist appears and French keeps you guessing right up until the very end. –Seira Wilson

Tana French is also the author of In the Woods, The Likeness, Faithful Place, Broken Harbor and The Secret Place. Her books have won awards including the Edgar, Anthony, Macavity, and Barry awards, the Los Angeles Times Award for Best Mystery/Thriller, and the Irish Book Award for Crime Fiction. She lives in Dublin with her family.
From the Trade Paperback edition.