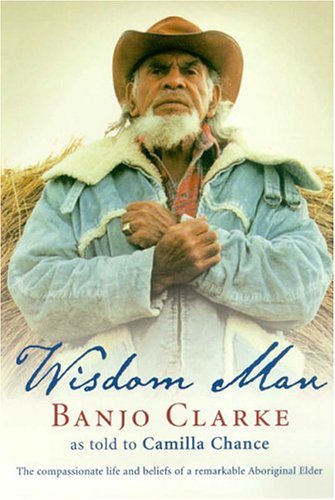 Banjo Clarke was an elder of the Kirrae Whurrong, a people of the Gunditjmara nation, and was a direct descendant of Queen Truganini. He was born in 1922 near Warrnambool, and by the time he passed away in March 2000 he was known and loved by thousands for his wisdom and compassion.

Wisdom Man covers Banjo’s life from his childhood on a mission, through the grim years of the Depression, his solo travels in search of work, the birth of his eleven children, and his embrace of the Baha’i faith, which he found very close to Aboriginal spirituality. His story is one of remarkable forbearance during terrible encounters with racism, cruelty and the loss of loved ones, and is made all the more extraordinary by his lack of bitterness and anger. Wisdom Man also distils the essence of Aboriginal culture: Banjo constantly points to those aspects which he sees as relevant to all humanity, particularly in terms of our relationship with the land. Banjo Clarke embodied the spirit of reconciliation in its most generous and forgiving form, espousing and living it long before it was given a name, long before it became fashionable.

Includes a foreword by former prime minister Malcolm Fraser, who knew Banjo, and tributes by Archie Roach, Martin Flanagan, Judith Durham, among others – a sample of the wide range of people whose lives he touched. Countless people from all over the world came to Warrnambool to seek him out, and his door was always open to the homeless and the troubled.

Camilla Chance was born in Reading, England and came to Australia in 1946. She has worked as an editor at Faber and Faber, an English teacher and a book reviewer, and now lives in Warrnambool. She became a close friend of Banjo Clarke after first meeting him in 1975. At his request she began interviewing him soon after, continuing until his death some twenty-five years later. Banjo Clarke was convinced that traditional Aboriginal values could help the world counter greed, conceit, and lack of human caring, and he wanted his story recorded in his own words by someone he trusted outside his family.