Items related to Travels With Charley: In Search of America

Steinbeck, John Travels With Charley: In Search of America

Travels With Charley: In Search of America 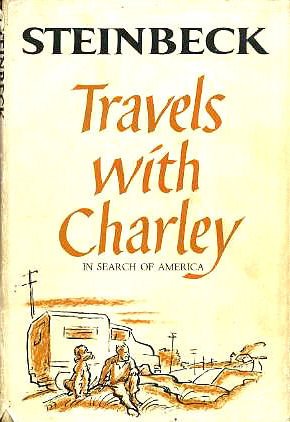 To hear the speech of the real America, to smell the grass and the trees, to see the colors and the light: these were John Steinbeck's goals as he set out, at the age of fifty-eight, to rediscover the country he had been writing about for so many years. With Charley, his French poodle, Steinbeck drives the interstates and the country roads, dines with truckers, encounters bears at Yellowstone and old friends in San Francisco. Along the way he reflects on the American character, racial hostility, the particular form of American loneliness he finds almost everywhere, and the unexpected kindness of strangers.

In September 1960, John Steinbeck and his poodle, Charley, embarked on a journey across America. A picaresque tale, this chronicle of their trip meanders along scenic backroads and speeds along anonymous superhighways, moving from small towns to growing cities to glorious wilderness oases. Travels with Charley is animated by Steinbeck's attention to the specific details of the natural world and his sense of how the lives of people are intimately connected to the rhythms of nature - to weather, geography, the cycles of the seasons. His keen ear for the transactions among people is evident, too, as he records the interests and obsessions that preoccupy the Americans he encounters along the way.

1. Travels With Charley: In Search of America

2. Travels With Charley: In Search of America Steinbeck, John

3. Travels With Charley: In Search of America

4. Travels With Charley: In Search of America Steinbeck, John