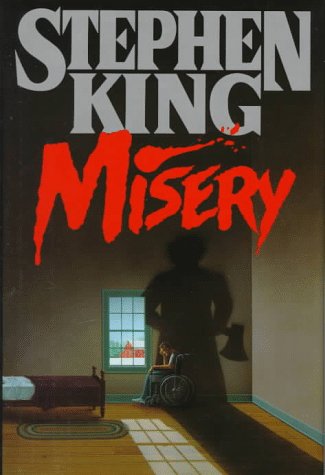 Paul Sheldon, author of a series of historical romances, wakes up in a secluded farmhouse in Colorado with broken legs and Annie Wilkes, a disappointed fan, hovering over him with drugs, ax, and blowtorch and demanding he bring his heroine back to life

In Misery (1987), as in The Shining (1977), a writer is trapped in an evil house during a Colorado winter. Each novel bristles with claustrophobia, stinging insects, and the threat of a lethal explosion. Each is about a writer faced with the dominating monster of his unpredictable muse.

Paul Sheldon, the hero of Misery, sees himself as a caged parrot who must return to Africa in order to be free. Thus, in the novel within a novel, the romance novel that his mad captor-nurse, Annie Wilkes, forces him to write, he goes to Africa--a mysterious continent that evokes for him the frightening, implacable solidity of a woman's (Annie's) body. The manuscript fragments he produces tell of a great Bee Goddess, an African queen reminiscent of H. Rider Haggard's She.

He hates her, he fears her, he wants to kill her; but all the same he needs her power. Annie Wilkes literally breathes life into him.

Misery touches on several large themes: the state of possession by an evil being, the idea that art is an act in which the artist willingly becomes captive, the tortured condition of being a writer, and the fears attendant to becoming a "brand-name" bestselling author with legions of zealous fans. And yet it's a tight, highly resonant echo chamber of a book--one of King's shortest, and best novels ever. --Fiona Webster

Stephen King is the author of more than fifty books, all of them worldwide bestsellers. His recent work includes Sleeping Beauties (co-written with his son Owen King), End of Watch, the short story collection The Bazaar of Bad Dreams, Finders Keepers, Mr. Mercedes (an Edgar Award winner for Best Novel and now an AT&T Audience Network original television series), Doctor Sleep, and Under the Dome. His novel 11/22/63—a recent Hulu original television series event—was named a top ten book of 2011 by The New York Times Book Review and won the Los Angeles Times Book Prize for Mystery/Thriller as well as the Best Hardcover Book Award from the International Thriller Writers. His epic works The Dark Tower and It are the basis for major motion pictures. He is the recipient of the 2014 National Medal of Arts and the 2003 National Book Foundation Medal for Distinguished Contribution to American Letters. He lives in Bangor, Maine, with his wife, novelist Tabitha King.