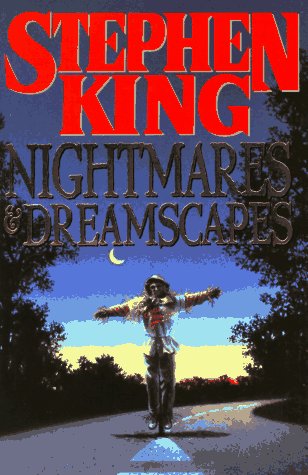 A new collection of short stories, several being published for the first time, offers a spine-tingling journey to the nightmare world created by a master of sheer terror and grotesque imagination. 1,500,000 first printing. $400,000 ad/promo. BOMC.

Many people who write about horror literature maintain that mood is its most important element. Stephen King disagrees: "My deeply held conviction is that story must be paramount.... All other considerations are secondary--theme, mood, even characterization and language."

These fine stories, each written in what King calls "a burst of faith, happiness, and optimism," prove his point. The theme, mood, characters, and language vary, but throughout, a sense of story reigns supreme. Nightmares & Dreamscapes contains 20 short tales--including several never before published--plus one teleplay, one poem, and one nonfiction piece about kids and baseball that appeared in the New Yorker. The subjects include vampires, zombies, an evil toy, man-eating frogs, the burial of a Cadillac, a disembodied finger, and a wicked stepfather. The style ranges from King's well-honed horror to a Ray Bradbury-like fantasy voice to an ambitious pastiche of Raymond Chandler and Ross MacDonald. And like a compact disc with a bonus track, the book ends with a charming little tale not listed in the table of contents--a parable called "The Beggar and the Diamond." --Fiona Webster

STEPHEN KING is a prolific and perennially bestselling author and an recognized master of the horror genre. He was the 2003 recipient of The National Book Foundation's Medal for Distinguished Contribution to American Letters.

Book Description Hardcover. Condition: New. Dust Jacket Condition: New. 1st Edition. FIRST EDITION/FIRST PRINTING with a complete number line beginning in 1. NEW & UNREAD - SPINE HAS NOT BEEN CRACKED - no flaws or defects - Hardcover in Dust Jacket as issued. DUST JACKET IN PROTECTIVE BRODART COVER - A VERY COLLECTIBLE COPY OF THIS BOOK - PHOTOS OF THE ACTUAL BOOK SENT UPON REQUEST. The boards Are Clean, Not Bumped. Fore Edges Are Clean. Dust Jacket Is In Fine Condition. No Chipping, Crinkles, or tears. Not Price Clipped. All books are boxed and shipped with bubble wrap - ALL BOOKS HAVE BEEN BOXED IN CLIMATE CONTROLLED STORAGE AND HAVE NOT BEEN TOUCHED BY ANY OTHER HUMAN THAN ME FOR AT LEAST THE LAST 10 YEARS - ALL BOOKS ARE SEALED AND BUBBLE WRAPPED AND SHIPPED IN BOXES - YOU CAN BUY HERE WITH CONFIDENCE KNOWING THAT A BUNCH OF STRANGERS HAVE NOT HANDLED YOUR BOOK -. Seller Inventory # 007553