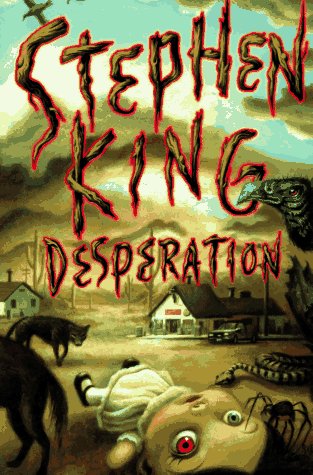 Several cross-country travelers--including a writer, a family on vacation, and a professor and his wife--end up in the little mining town of Desperation, where a crazy policeman and evil forces force them to fight for their lives. 1,750,000 first printing. $1,000,000 ad/promo. BOMC Main.

A notice to those who feel that Stephen King has lost his magic touch: Desperation is the genuine goods. The ensemble cast of ordinary Americans thrown together by chance, including a disgruntled alcoholic writer and a child who is wise beyond his years, may be a bit too familiar. But the nearly deserted Nevada mining town with an enormous haunted mine pit and an abandoned movie theatre where the survivors hang out makes for a striking battleground, and the grisly action rarely flags. Best of all, though, are the characters of Tak, the ancient body-hopping evil who emerges from the mine, and of "God"--whom the New York Times describes as "the edgiest creation in Desperation. Remote, isolated, ironic, shrouded behind disguises, perhaps 'another legendary shadow,' this deity forms a sly foil, and an icy mirror, to Tak."