Items related to An indelible stain?: The question of genocide in Australia&#...

Reynolds, Henry An indelible stain?: The question of genocide in Australia's history

An indelible stain?: The question of genocide in Australia's history 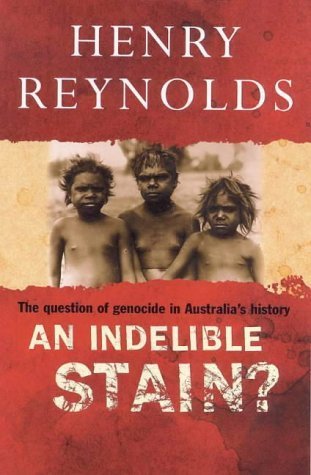 Shipping: US$ 26.67
From United Kingdom to U.S.A.
Destination, rates & speeds

2. An Indelible Stain?: The Question of Genocide in Australia's History

Book Description Viking, Ringwood, Vic, 2001. Soft cover. Condition: Near Fine. 1st Edition. viii+209pp., Pictorial colour illustrated cover with col. portrait of author on rear, light edge and corner wear to covers with mild tanning to pages and small tear top corner of page 159, notes, further reading, index. In this important new book, Henry Reynolds examines the controversial question of genocide, aware that there can be no final answer. Taking as his starting point the definition of genocide in the United Nations Genocide Convention, he looks at key events in Australia's history, including the smallpox epidemic of 1789, Tasmania's infamous Black Line, the actions of the Queensland Native Police, and the assimilationist policies of the 1950s. Size: Octavo. Book. Seller Inventory # 000787

3. An Indelible Stain?: The Question of Genocide in Australia's History

4. An Indelible Stain?: The Question of Genocide in Australia's History

Book Description Viking Penguin Australia, 2001. Softcover. Condition: Near Fine. Was the killing of Aboriginal people by white settlers genocide? Were government policies designed to eliminate the Aboriginal races?In 1830 the Secretary of State for the Colonies, Sir George Murray, wrote: 'the adoption of any line of conduct, having for its avowed, or for its secret object, the extinction of a Native race, could not fail to leave an indelible stain upon the character of the British Government.'Has our history left an 'indelible stain' upon the character of Australian governments - imperial, colonial, federal, State - as Sir George Murray feared so long ago?In this important new book, Henry Reynolds examines the controversial question of genocide, aware that there can be no final answer. An Indelible Stain? will be a valuable contribution to the national debate on one of the most vital issues facing Australia in the twenty-first century. pp. 209 First Edition #0920 (Light age tanning) ISBN 10: 0670912204ISBN 13: 9780670912209 Elizabeth's Bookshops have been one of Australia's premier independent book dealers since 1973. Elizabeth's family-owned business operates four branches in Perth CBD, Fremantle (WA), and Newtown (NSW). All orders are dispatched within 24 hours from our Fremantle Warehouse. All items can be viewed at Elizabeth's Bookshop Warehouse, 23 Queen Victoria Street, Fremantle WA. Seller Inventory # 17078