Items related to Most Human Human: A Defence of Humanity in the Age...

Christian, Brian Most Human Human: A Defence of Humanity in the Age of the Computer

Most Human Human: A Defence of Humanity in the Age of the Computer 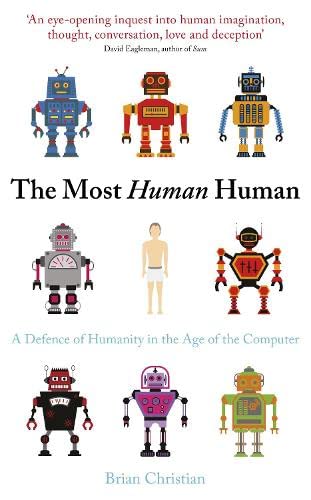 For the first time in history, we are interacting with computers so sophisticated that we think they're human beings. This is a remarkable feat of human ingenuity, but what does it say about our humanity? Are we really no better at being human than the machines we've created? By mimicking our behaviour and conversation, computers have recently come within a single vote of passing the Turing Test, the widely accepted threshold at which a machine can be said to be 'thinking' or 'intelligent'. In this witty, wide-ranging and inspiring investigation, Brian Christian takes the recent and breathtaking advances in artificial intelligence as the opportunity to rethink what it means to be human, and what it means to be intelligent, in the 21st century. Competing head-to-head with the world's leading AI programmes at the annual Turing Test competition, he uses their astonishing achievements as well as their equally fascinating failings to reveal our most human abilities: to learn, to communicate, to intuit and to understand. And in an age when computers may be steering us away from these activities, he shows us how to become the most human humans that we can be. Drawing on science, philosophy, literature and the arts, and touching on aspects of life as diverse as language, work, school, chess, speed-dating, art, video games, psychiatry and the law, "The Most Human Human" shows that that far from being a threat to our humanity, computers provide a better means than ever before of understanding what it is.

Brian Christian was born in 1984. He holds a dual degree from Brown University in computer science and philosophy, and an MFA in poetry. His work has appeared in both literary and scientific journals. In 2009, he competed with the world's leading artificial intelligence software at the international Turing Test competition, where he was awarded the prize for 'The Most Human Human'. This is his first book. In it, you will discover: Why computers can fly planes but can't ride bicycles How Deep Blue beat Gary Kasparov but why it didn't count What arguments have in common with amnesia Why speaking to a machine is like a bad date What life is all about and how to live it better...

Remarkable, enjoyable, heartening. A philosophical joyride connecting the thoughts of Aristotle with David Brent ... The day that a machine creates work of such wit and originality, we should all be very worried The Times Lively, thought-stirring, entertaining ... an invaluable sourcebook on computing in modern-day life ... compelling insights -- John Gray New Statesman Tremendously entertaining ... explores human identity by asking what we can glean about ourselves from successes and failures in the field of artificial intelligence Metro **** Fast-paced, witty, and thoroughly winning ... investigates the nature of human interactions, the meaning of language, and the essence of what sets us apart from machines ... fabulous Publishers Weekly Excellent ... a fascinating explanation of what it means to be human ... In one particularly insightful section, Christian notes that we can only be replaced by machines if we have first allowed ourselves to become like them Financial Times Immensely ambitious and bold, intellectually provocative, while at the same time entertaining and witty - a delightful book about how to live a meaningful, thriving life -- Alan Lightman, Author Of Einstein's Dreams Such an important book ... Brian Christian takes on this very weighty task, and somehow makes it fun -- Brian Shenk, Author Of The Genius In All Of Us A lively personable read and an empowering affirmation of our species Time Out **** An eye-opening inquest into human imagination, thought, conversation, love and deception David Eagleman, author of Sum Absorbing ... Christian cleverly suggests that the Turing Test not only tells us how smart computers are but also teaches us about ourselves. ... covers a great deal of ground with admirable clarity but with a lightness of touch ... has a real knack for summing up key ideas by applying them to real-life situations -- Julian Baggini Wall Street Journal An irreverent picaresque ... What Christian learns along the way is that if machines win the imitation game as often as they do, it's not because they're getting better at acting human; it's because we're getting worse ... An authentic son of Frost, he learns by going where he has to go, and in doing so proves that both he and his book deserve their title The New York Times Strange, fertile and sometimes beautiful ... takes both the deep limitations and halting progress of artificial intelligence as an occasion for thinking about the most human activity -- Matthew Crawford, Author Of The Case For Working With Your Hands Entertaining and informative Economist

1. The Most Human Human: A Defence of Humanity in the Age of the Computer

2. The Most Human Human: A Defence of Humanity in the Age of the Computer

Book Description Viking, 2011. Hardcover. Condition: Good. A slight tan to page edges Good condition is defined as: a copy that has been read but remains in clean condition. All of the pages are intact and the cover is intact and the spine may show signs of wear. The book may have minor markings which are not specifically mentioned. Most items will be dispatched the same or the next working day. Seller Inventory # wbb0013124908

3. The Most Human Human: A Defence of Humanity in the Age of the Computer

Shipping: US$ 18.30
From United Kingdom to U.S.A.
Destination, rates & speeds