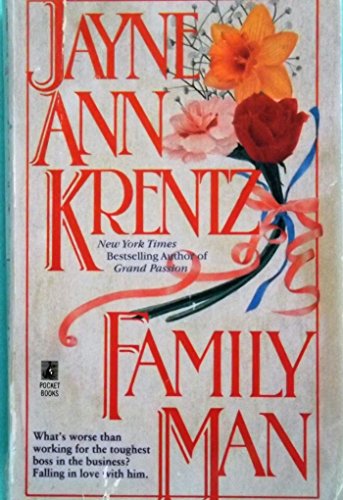 It takes a heavenly creature to change a rebel with a cause into a...

A decade of working for the high-powered Gilchrist family empire has made sassy Katy Wade determined to open her own business. But there's one last problem she must solve before she can leave. The Gilchrists need an heir apparent to save their mysteriously floundering fortunes, and there's only one man for the job: Luke Gilchrist. All his life the Gilchrists have made Luke pay for his father's scandal, and now he's a renegade who's sworn he'll never go home -- except to get even. Katy must persuade Luke to use his business expertise to rescue his family, but one look in his sexy green eyes, and she knows why they affectionately call him "the Bastard."

Meanwhile, Luke's decided he wants her even more than he wants revenge. He agrees to play savior, but only with Katy at his side. It's a strategy sure to make this red-haired angel madder than hell, but she's the only one who can turn this devilish rogue into a family man. Now he must trust Katy with his secrets -- and she must believe in his love.

Technically speaking, Luke Gilchrist was not a bastard. But despite his legitimate heritage, he had been cast in the role thirty-six years ago on the day of his birth, and he had played the part to the hilt ever since.

Gilchrists were nothing if not dramatic about everything they did, Katy Wade reminded herself as she got out of her car. It would be easy to laugh at them if it were not for the fact that they could be so damn dangerous.

Katy resolutely picked up her briefcase and walked toward the front porch of the old, weather-beaten house. Luke Gilchrist lounged in the doorway, waiting for her the way a hawk waits for a mouse to emerge from its burrow. He was not alone. A massive black dog of indeterminate breed waited with him. The dog carried a large metal feeding dish clamped in its teeth.

Katy had never met Luke, but she had been surrounded by Gilchrists for years, and she knew the species well. She would have recognized this particular member of the family anywhere. As she had confided to her brother and her secretary, the Gilchrist clan reminded her of a coven of tall, elegant witches and warlocks.

It was not just the dominant family traits of jet-black hair, aristocratic features, and distinctive green eyes that had put the notion into Katy's head. It had more to do with the underlying aura of grimness she often sensed in them. It was a strange, rather depressing darkness that lay just below the surface.

As far as Katy was concerned, Gilchrists were, by nature, extremists. They were either ice cold or scalding hot. For them there was rarely any serene middle ground.

Gilchrists seethed. They brooded. They could easily become obsessed with getting their own way. They were capable of nursing grudges for years.

They were also intelligent, even brilliant, as Luke was reputed to be, but they had no interest in the lighter side of life. For them everything was passion or anguish, victory or defeat. Katy could not imagine a Gilchrist in a playful mood.

The only time Gilchrists, appeared to experience an emotion that even vaguely resembled happiness was when they were talking about money or revenge.

Katy had had occasion to give the matter a great deal of thought during the past few years, but she honestly did not know what caused the absence of light she sensed in the members of the Gilchrist family. Sometimes she thought it was a result of their ambitious natures. At other times she decided it was some weird genetic thing. Then there were occasions when she was convinced the family's problems stemmed simply from the years of iron-fisted rule it had endured under the clan's matriarch, Justine Gilchrist.

All Katy knew for certain was that she had been well treated by Justine, and she was deeply indebted to her. That did not mean, however, that Katy was not looking forward to escaping Gilchrist clutches at the earliest possible moment. That moment was, at long last, on the horizon. It was nearly within her reach. But first she had to persuade the clan's chief warlock to return to the bosom of his family.

Luke Gilchrist, although he did not know it, was Katy's ticket to freedom.

She eyed him cautiously as she approached the porch, aware of her growing sense of unease. It was ridiculous to feel this way, she thought. She was accustomed to dealing with Gilchrists. The trick was not to take them as seriously as they took themselves.

But for some reason this particular Gilchrist was having an unexpected effect on her senses. Perhaps it was simply because she needed him. Her own future was tied to his now.

Luke was typical of his clan in that he exhibited a predatory grace. Because she was well acquainted with the family legends surrounding him, Katy knew he was thirty-six years old, eight years her senior. There were already a few silver shards in the black depths of his hair.

The green ice in his eyes had probably been there since his birth.

To Katy, who stood a mere five feet, four inches, Gilchrists were annoyingly tall. And this one was the tallest specimen she had seen, six-one or -two at least. When she got closer he was definitely going to loom over her.

Katy hated being loomed over.

As she approached the steps she could not help but notice how Luke resembled the large black dog that hovered beside him. Both were powerfully muscled and cold-eyed. Of the two, Katy decided, she would rather face the dog in a dark alley. The animal appeared a trifle more reasonable than his master.

Katy glanced warily at the evil-eyed dog as she reached the bottom step. Then she looked up at the man who stood waiting in the shadowed doorway. This entire experience was getting downright creepy, she thought. Talk about atmosphere. But then, Gilchrists always went in for atmosphere.

The wind howling behind her was driving a storm in off the sea. The waves below the lonely, windswept bluff were already churning into white foam. The rain sweeping across the ocean would hit land any minute.

It had been a long drive from Dragon Bay on the Washington coast north of Seattle to this desolate section of Oregon. Nevertheless, Katy suddenly could not wait to get back into her car and scurry home. She did not care if she had to drive all night. She wanted this unpleasant expedition completed as soon as possible.

"I assume you're Luke Gilchrist," Katy stated. She had learned long ago to be assertive around Gilchrists. They tended to turn lesser mortals into road kill without even noticing the thump.

"Katy Wade, your grandmother's personal assistant." Katy tightened her grip on her briefcase and tried not to notice the way his dark voice ruffled her nerve endings. What was the matter with her? she wondered. Gilchrists, never had this effect on her.

"Ah, Ms. Wade," Luke drawled softly. "I thought you might show up sooner or later."

"I've been trying to reach you for weeks, Mr. Gilchrist. I've left no less than twelve messages on your answering machine. I also sent four Express Mail letters and two telegrams. I know you received the letters and the telegrams. I have receipts showing that they were delivered. You signed for them."

"So?" Luke propped one sleek shoulder against the doorjamb and regarded her with the patented Gilchrist vampire stare.

Katy had to admit that Luke did the look better than anyone else in the family. She found his alarming green eyes far more disturbing than those of the rest of the clan.

There was something literally mesmerizing about his gaze. Katy had a sensation of vertigo, as if she were about to fall into pools of emerald fire. A curious thread of unfamiliar excitement began to uncoil within her.

Desperately she tried to focus on something besides his eyes and wound up examining his attire.

He was dressed in a snug-fitting black crew-neck sweater, black chinos, and low black boots. The clothes emphasized the natural elegance of his lean frame. All Gilchrists seemed to have an affinity for the color that best suited their difficult personalities. They all favored black.

And they all had nice white teeth.

"So, you have not given me the courtesy of a response, Mr. Gilchrist." Katy held tendrils of her wind-whipped red hair out of her eyes as she glowered up at him.

"I never respond to people who call on behalf of Justine Gilchrist or Gilchrist, Inc." His eyes raked her from the top of her red head to the toes of her very yellow high heels. "Nothing personal."

Katy felt herself blushing furiously under his intent examination. For an instant she was certain there was something disturbingly sensual about the way he was watching her. In the next breath she told herself it had to be her imagination. No Gilchrist would ever be attracted to her. She was definitely not their type.

And they certainly weren't hers.

At that moment the dog, which stood nearly thigh-high to its master and had a broad head that reminded Katy of a snake's, whined hungrily. The beast's lips curled around the bowl clamped in its teeth. Saliva dripped from its mouth.

Katy got hold of her scattered senses and squared her shoulders. "Look, Mr. Gilchrist, would you mind if I came inside? It's starting to rain."

She started boldly up the steps, knowing that if she waited politely for an invitation, she would probably end up standing outside for the duration of the conversation. Gilchrists were quite capable of exercising a near-lethal charm on occasion, but they only did so when it suited them. Katy guessed Luke Gilchrist didn't consider her worth the effort.

Luke and his dog both hesitated as she strode toward them. Then with a shrug Luke stepped back into the hall.

"What the hell. You're here now, and you don't look like the type to leave without a struggle." Luke glanced down at the dog. "Out of the way, Zeke. Looks like the lady's coming inside."

Zeke gave Katy a glowering glance. He whined softly one last time, displaying enormous fangs. Then he reluctantly turned and padded down the hall. He vanished around the corner into what must have been the living room.

"Why does he carry that dish around like that?" Katy asked uneasily.

"Damned if I know. He wandered into the yard a couple of years ago and stayed. He's got most of the qualities I require in a housemate. He doesn't make a lot of noise, doesn't have to be entertained, and doesn't borrow my stuff."

"Yes, well, I shall try not to be overwhelmed by the gracious hospitality the two of you are extending." Katy sailed briskly through the door and set her leather briefcase down on the ancient linoleum floor. She started unfastening the buttons of her sunshine-yellow jacket.

She had worn a yellow silk blouse and a business-like, pencil-slim green skirt for this interview. It had been impossible to guess precisely how to dress for a confrontation with Justine's mysterious grandson, but Katy had known enough about Gilchrists in general to wear her highest heels.