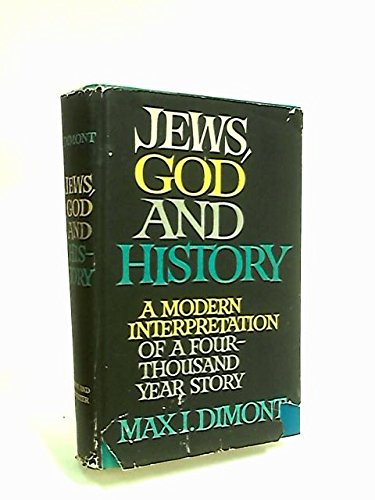 How have the Jews survived through so many millennia while other civilizations have declined and perished? What qualities mark the culture that has produced Moses, Christ, Spinoza, Marx, Freud, and Einstein? From ancient Palestine through Europe and the Orient, to America and modern Israel, Max I. Dimont shows how the saga of the Jews is interwoven with the story of virtually every nation on earth. This is a tale of a people escaping annihilation, fighting, falling back, advancingâ a lively and fascinating look at how the Jews have contributed to humankind’s spiritual and intellectual heritage in remarkable ways, and across a remarkable span of history.

Max I. Dimont, author of The Indestructible Jews, The Jews in America, The Amazing Adventures of the Jewish People, and Appointment in Jerusalem, was born in Helsinki, Finland, and came to the United States in 1930. He taught himself English by reading Shakespeare’s plays, the Bible, and American plays translated into Finnish. After serving in intelligence with the U.S. Army during World War II, he worked in public relations and employee relations for Edison Brothers Stores in St. Louis. Following the first publication of the bestselling Jews, God and History, he lectured extensively on Jewish history throughout the United States, Canada, South Africa, Brazil, and Finland until his death in 1992.

Referencing the Old Testament and Palestine's influence on world civilization, Finnish-American Dimont's secular history of the Jewish people was a surprise bestseller when originally published, and it has remained in print for more than twenty years. Deservedly so, for, despite quibbles from historians and religious partisans, the author has turned four thousand years in the life of one people into a lively, canny, authoritative, brainy and informative page-turner. To appreciate this audio, one must accept the kind of trade-offs encountered when a work that exists in space is translated into a work that exists in time. These include the inability to refer to indices, improbabilities of translating charts and graphs to sound, troubles going back and forth with footnotes, the need for heavy concentration to absorb the sheer density of data. On the plus side, one enjoys the accurate pronunciation of foreign words and phrases, as well as the narrator's animation of concepts and events. Anna Fields does a nice job here. Her listener-friendly cadences express not only the sense of the lines, but also the connections among ideas and the author's underlying intelligence. Be that as it may, to get the most out of the recording, one must still follow along with the text. Y.R. (c)AudioFile, Portland, Maine