Items related to The Body in the Library

Agatha Christie The Body in the Library

The Body in the Library 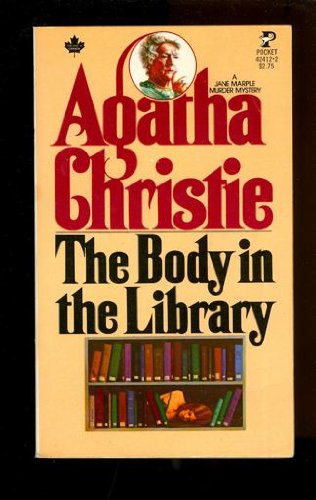 It's seven in the morning. The Bantrys wake to find the body of a young woman in their library. She is wearing an evening dress and heavy makeup, which is now smeared across her cheeks. But who is she? How did she get there? And what is the connection with another dead girl, whose charred remains are later discovered in an abandoned quarry? The respectable Bantrys invite Miss Marple to solve the mystery ... before tongues start to wag.

Stephanie Cole, OBE, began her career by joining the Bristol Old Vic Theatre School at the age of fifteen, making her debut on stage two years later. She is well known for her roles in the British television and radio series Doc Martin, Cabin Pressure, and Waiting for God, for which she received the Best TV Comedy Actress Award. She was given an honorary master of arts degree from the University of Bristol, located near her current residence in Somerset, England.

Mrs. Bantry was dreaming. Her sweet peas had just taken a First at the flower show. The vicar, dressed in cassock and surplice, was giving out the prizes in church. His wife wandered past, dressed in a bathing suit, but, as is the blessed habit of dreams, this fact did not arouse, the disapproval of the parish in the way it would assuredly have done in real life.

Mrs. Bantry was enjoying her dream a good deal. She usually did enjoy those early-morning dreams that were terminated by the arrival of tea. Somewhere in her inner consciousness was an awareness of the usual noises of the household. The rattle of the curtain rings on the stairs as the housemaid drew them, the noises of the second housemaid's dustpan and brush in the passage outside. In the distance the heavy noise of the front-door bolt being drawn back.

Another day was beginning. In the meantime she must extract as much pleasure as possible from the flower show, for already its dreamlike quality was becoming apparent.

Below her was the noise of the big wooden shutters in the drawing room being opened. She heard it, yet did not hear it. For quite half an hour longer the usual household noises would go on, discreet, subdued, not disturbing because they were so familiar. They would culminate in a swift, controlled sound of footsteps along the passage, the rustle of a print dress, the subdued chink of tea things as the tray was deposited on the table outside, then the soft knock and the entry of Mary to draw the curtains.

In her sleep Mrs. Bantry frowned. Something disturbing was penetrating through the dream state, something out of its time. Footsteps along the passage, footsteps that were too hurried and too soon. Her ears listened unconsciously for the chink of china, but there was no chink of china.

The knock came at the door. Automatically, from the depths of her dream, Mrs. Bantry said, "Come in." The door opened; now there would be the chink of curtain rings as the curtains were drawn back.

But there was no chink of curtain rings. Out of the dim green light Mary's voice came, breathless, hysterical. "Oh, ma'am, oh, ma'am, there's a body in the library! "

And then, with a hysterical burst of sobs, she rushed out of the room again.

Mrs. Bantry sat up in bed.

Either her dream had taken a very odd turn or else--or else Mary had really rushed into the room and had said--incredibly fantastic!--that there was a body in the library.

"Impossible," said Mrs. Bantry to herself. "I must have been dreaming."

But even as she said it, she felt more and more certain that she had not been dreaming; that Mary, her superior self-controlled Mary, had actually uttered those fantastic words.

Mrs. Bantry reflected a minute and then applied an urgent conjugal elbow to her sleeping spouse. "Arthur, Arthur, wake up."

Colonel Bantry grunted, muttered and rolled over on his side.

"Wake up, Arthur. Did you hear what she said?"

"Very likely," said Colonel Bantry indistinctly. "I quite agree with you, Dolly," and promptly went to sleep again.

Mrs. Bantry shook him. "You've got to listen. Mary came in and said that there was a body in the library."

"A body in the library."

Colonel Bantry collected his scattered faculties and proceeded to deal with the situation. He said, "Nonsense, old girl! You've been dreaming."

"Mary came in and said there was a body in the library?"

"But there couldn't be," said Colonel Bantry.

"No-no, I suppose not," said Mrs. Bantry doubtfully. Rallying, she went on, "But then why did Mary say there was?"

"You must have imagined it."

Colonel Bantry was by now thoroughly awake and prepared to deal with the situation on its merits. He said kindly, "You've been dreaming, Dolly. It's that detective story you were reading--The Clue of the Broken Match. You know, Lord Edgbaston finds a beautiful blonde dead on the library hearthrug. Bodies are always being found in libraries in books. I've never known a case in real life."

"Perhaps you will now," said Mrs. Bantry. "Anyway, Arthur, you've got to get up and see."

"But really, Dolly, it must have been a dream. Dreams often do seem wonderfully vivid when you first wake up. You feel quite sure they're true."

"I was having quite a different sort of dream about a flower show and the vicar's wife in a bathing dress--something like that." Mrs. Bantry jumped out of bed and pulled back the curtains. The light of a fine autumn day flooded the room.

"I did not dream it," said Mrs. Bantry firmly. "Get up at once, Arthur, and go downstairs and see about it."

"You want me to go downstairs and ask if there's a body in the library? I shall look a fool."

"You needn't ask anything," said Mrs. Bantry. "if there is a body--and of course it's just possible that Mary's gone mad and thinks she sees things that aren't there--well, somebody will tell you soon enough. You won't have to say a word."

Grumbling, Colonel Bantry wrapped himself in his dressing gown and left the room. He went along the passage and down the staircase. At the foot of it was a little knot of huddled servants; some of them were sobbing.

The butler stepped forward impressively. "I'm glad you have come, sir. I have directed that nothing should be done until you came. Will it be in order for me to ring up the police, sir?"

1. The Body in the Library

2. The Body in the Library

3. The Body in the Library

4. The Body in the Library

5. The Body in the Library

6. The Body in the Library

7. The Body in the Library: a Jane Marple Murder Mystery

8. The Body In the Library

Book Description Pocket Books, New York, 1970. Soft cover. Condition: Near Fine. Reprint of the third novel in the Miss Marple series. Lightly bumped at the head of the spine. In near fine condition. Seller Inventory # 28695