Items related to Something in the Air

Emma Lathen Something in the Air

Something in the Air 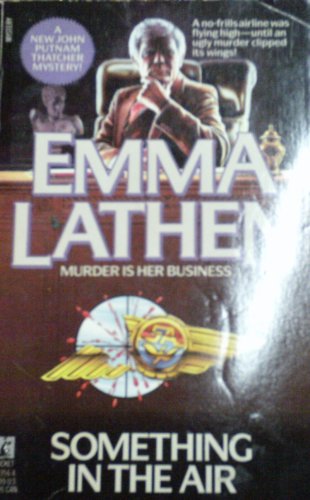 Wall Street banker/detective John Putnam Thatcher encounters intrique along with a loan request from Sparrow Flyways, an airline whose expansion plans are not to be deterred, even by opposition from its shareholders

The latest mystery to feature John Thatcher of New York's Sloan Guaranty Trust is set mainly in Boston, headquarters of the commuter airline Sparrow Flyways. A product of airline deregulation, Sparrow is a nonunion operation surviving on horizontal management and project development teams. Mitchell Scovil, CEO and guiding figure of the founders, dreams of expansion, but a group of lower-level employees (and shareholders) is worried about their investment. When their arrogant spokesperson is murdered, the Sloan, holding 20% of unsalable Sparrow stock in a trust, becomes involved. While the redoubtable Everett Gabler examines the airlines books, Thatcher meets the various suspects, including a former partner now in line for the presidency at a large rival carrier, two other founders still at Sparrow and the energetic young woman who spearheads the employees' group. With characteristic humor (an employees' work stoppage backfires, tying up the entire Northeast corridor over Thanksgiving weekend) and in a clearly conveyed business context of takeovers and proxy fights, the pseudonymous authors, in their 21st mystery, can still keep readers guessing until the last pages. John Thatcher is as perceptive and charming as ever. Mystery Guild main selection, Literary Guild and Doubleday Book Club alternates.
Copyright 1988 Reed Business Information, Inc.

1. Something in the Air

2. Something in the Air