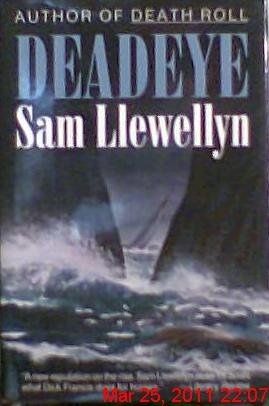 Divorce lawyer Harry Frazer stalks a group of murderous criminals intent on destroying the shoreline of his beloved Scottish village, and his hunt leads him through London, Rotterdam, Geneva, and Antwerp

Sam Llewellyn worked as an editor and fine art dealer until he decided that life was too short. Since then, his novels, published in twelve languages, have earned him a reputation as one of the world's master storytellers and writers of maritime thrillers. Many of his books are founded in personal experience. While researching them he has (amongst other things) chased pirates in the South China Sea, raced big-money multi-hulls in France, and run away from cocaine dealers in Spain.

As well as writing novels, Llewellyn has published half a dozen children's books, and works as a journalist for British and American newspapers and magazines such as the London Times and Daily Telegraph. He is a keen gardener, with added interests in ornithology and history and has also sailed yachts - several of which he built himself - all over the world. He now lives with his wife, award-winning children's writer and novelist Karen Wallace, and their two sons in a medieval house in the Welsh border country.

Since the appearance of his first nautical thriller, Llewellyn ( Death Roll ) has enjoyed favorable comparisons to Dick Francis, employing his sailing background and experience as successfully as Francis has exploited the world of horseracing. Llewellyn also creates complex heroes whose clear strengths --and foibles--are a large part of each book's appeal. Just such a man is divorce lawyer Harry Frazer, whose new boat is damaged in a late-night collision off the west coast of Scotland, landing him in a situation rife with violence and murder. Both courageous and compassionate (he is sole support of a self-destructive sister), Frazer confronts a deadly environmental threat to the Scottish village where he ends up after his accident. His love for an American woman he meets there spurs some rather implausible heroics, culminating in a final confrontation with the unexpected villain in a nearby stone quarry. These Ludlum-esque goings-on add an unfortunate air of improbability to Llewellyn's resolution--but cannot seriously blemish a wonderful read.
Copyright 1990 Reed Business Information, Inc.