Items related to The Way Things Ought to Be

Limbaugh, Rush The Way Things Ought to Be

The Way Things Ought to Be 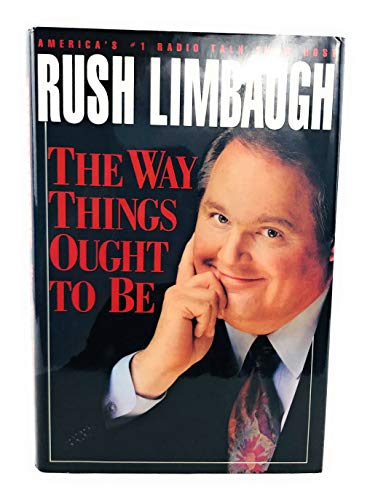 The popular radio talk-show host and right-wing reactionary speaks out on a variety of controversial issues, including AIDS, teenage sex, abortion, the environmental movement, Congress, the IRS, feminism, and more. 150,000 first printing. $75,000 ad/promo.

Rush Limbaugh is a way of life for over twelve million avid and devoted listeners. For three hours every day this comic conservative of the airwaves with "talent on loan from God" entertains, provokes and persuades friend sand enemies alike in a no-holds-barred show that is one of the biggest draws in radio history. Using personal anecdotes, Limbaugh now reveals the major influences on his life and views, and blasts off on all the leading issues of our day. Nothing escapes his acerbic wit and huggable charm as he proves why he is on the cutting edge of societal evolution and the epitome of morality and virtue. Here he holds forth on such subjects as: Anita Hill, The Homeless Fraud, The Media, and many others. Tackling the hottest topics of the times from Feminazis to Environmentalist Wackos, Rush Limbaugh is at his satirical best---the provocative conservative and the showman who is "documented to be almost always right 97.9% of the time" about The Way Things Ought To Be.

Rush Limbaugh Rush Limbaugh was born in Cape Girardeau, Missouri, a "quintessential Midwestern small town," where he fell in love with radio in elementary school. He became a Top-40 deejay in the 1960s and held various other jobs before finding his true calling as a radio talk show host at KFBK in Sacramento, California. In 1988 his radio show went national, and it can now be heard in 616 markets across the country. Rush Limbaugh makes his home in New York City and divides his time among his daily radio show, speaking engagements, and his nationally syndicated television show.

1. The Way Things Ought to Be

2. The Way Things Ought to Be

3. The Way Things Ought to Be

4. The Way Things Ought to Be

5. THE WAY THINGS OUGHT TO BE

6. THE WAY THINGS OUGHT TO BE