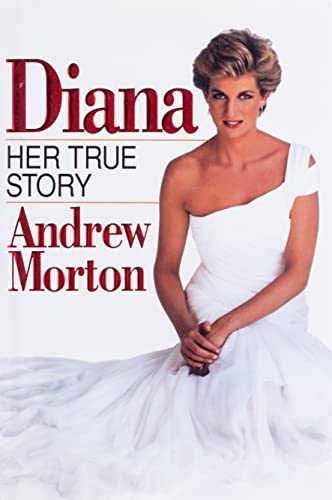 An intimate portrait of the Princess of Wales describes her public and private life, reveals details about her marital problems, and discusses her attitudes toward motherhood, public service, and more. 250,000 first printing. Lit Guild Feat Alt. First serial, People.

Diana: Her True Story was originally published in 1992 under the guise of a quasi-authorized biography, with mostly unnamed courtiers and royalty as the accredited sources. It instantly became a sizzling, international bestseller that lanced the boil of Windsor family dysfunction, triggering a chain of events that led to Charles and Diana's divorce. After her tragic death in 1997, Andrew Morton revealed that Diana herself had not only been the main source for the book, but had also edited his original drafts for accuracy. In return for this gold mine of information, Diana wanted complete anonymity for fear of retaliation from the queen. Her True Story in Her Own Words is enhanced by more than 75 full-color photographs of the princess, from her childhood in Althorp to her marriage to Charles at Westminster Abbey to her humanitarian efforts, and finally to her unforgettable funeral service. However, the most poignant portrayal of the princess emerges from the unedited transcriptions of Diana's interviews with Morton: "I think I'm going to cut a very different path from everyone else. I'm going to break away from this setup and go and help the man on the street."

The sudden and tragic death of Princess Diana has caused the entire world to reflect on how much this singular woman meant to us all. From her fairy-tale courtship, her wedding to Prince Charles, and the birth of her two wonderful boys to the stunning collapse of her marriage and the revelation of her psychological and physical trauma, we witnessed and shared in the wide range of emotions in her life. In the last few years, Diana's dedication to the downtrodden and unloved and her commitment as a mother have only strengthened her hold on our hearts.

When Diana: Her True Story was initially published in 1992, it was met with a hail of abuse from the British Establishment. As time passed, however, the magnitude of Diana's marital and personal distress made it clear, even to the greatest doubters, that this book was indeed Diana's true story; and finally, in 1995, she revealed in a BBC interview that she had indirectly cooperated with Andrew Morton.

What has not been known, however, until the publication of this new edition, is that Diana: Her True Story was in fact almost entirely based on her own words, supplemented by interviews with her friends. In 1991 and 1992, when this book was first conceived and written, Diana felt trapped and powerless within the royal family. She knew that the truth about her life was submerged under a mountain of royal propaganda. Diana: Her True Story chronicles Diana's unhappiness, which began shortly before her wedding day, and reveals the life of a young and beautiful woman who, trapped in a loveless marriage, had sunk to the depths of despair; from which recovery seemed impossible. In an act of desperation, she made the decision in 1991 to tell her own story, no matter what the cost. And so she and Andrew Morton began a collaboration that was to shake the royal family to its foundations and, eventually, force Diana to seek a new life. Tragically, that new, and briefly happy, life is over.

This new edition contains the story of how the book first came into being. What's more, Diana is able, finally, to tell her own story, in her own words. Its pages contain her own testament -- the closest we will ever come to her autobiography.