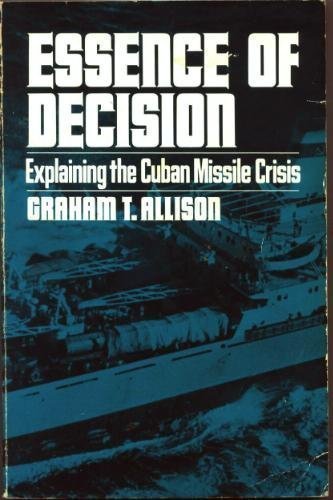 One of the most influental political science works written in the post World War II era, the original edition of Essence of Decision is a unique and fascinating examination of the pivotal event of the cold Cold War. Not simply revised, but completely re-written, the Second Edition of this classic text is a fresh reinterpretation of the theories and events surrounding the Cuban Missle Crisis, incorporating all new information from the Kennedy tapes and recently declassified Soviet files. Essence of Decision Second Edition, is a vivid look at decision-making under pressure and is the only single volume work that attempts to answer the enduring question: how should citizens understand the actions of their government?

"A lively updating of a classic, in many ways superior to the original." -- Richard K. Betts, Columbia University

"More than a revised edition, this is a new book, with the most recent empirical material and sophisticated theorizing. Important as it was, the original Essence of Decision now appears to have been a first draft; this version was worth waiting for." -- Robert Jervis, Columbia University

"The revised edition updates both the theory and the history in a compelling manner. It is an impressive achievement." -- Scott Sagan, Stanford University