Items related to The Poems of Emily Dickinson: Reading Edition 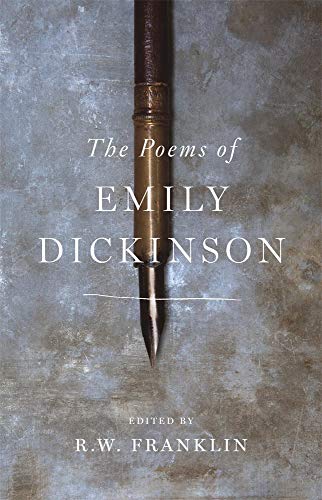 Emily Dickinson, poet of the interior life, imagined words/swords, hurling barbed syllables/piercing. Nothing about her adult appearance or habitation revealed such a militant soul. Only poems, written quietly in a room of her own, often hand-stitched in small volumes, then hidden in a drawer, revealed her true self. She did not live in time but in universals―an acute, sensitive nature reaching out boldly from self-referral to a wider, imagined world.

Dickinson died without fame; only a few poems were published in her lifetime. Her legacy was later rescued from her desk―an astonishing body of work, much of which has since appeared in piecemeal editions, sometimes with words altered by editors or publishers according to the fashion of the day.

Now Ralph Franklin, the foremost scholar of Dickinson's manuscripts, has prepared an authoritative one-volume edition of all extant poems by Emily Dickinson―1,789 poems in all, the largest number ever assembled. This reading edition derives from his three-volume work, The Poems of Emily Dickinson: Variorum Edition (1998), which contains approximately 2,500 sources for the poems. In this one-volume edition, Franklin offers a single reading of each poem―usually the latest version of the entire poem―rendered with Dickinson's spelling, punctuation, and capitalization intact. The Poems of Emily Dickinson: Reading Edition is a milestone in American literary scholarship and an indispensable addition to the personal library of poetry lovers everywhere.

Emily Dickinson proved that brevity can be beautiful. Only now is her complete oeuvre--all 1,775 poems--available in its original form, uncorrupted by editorial revision, in one volume. Thomas H. Johnson, a longtime Dickinson scholar, arranged the poems in chronological order as far as could be ascertained (the dates for more than 100 are unknown). This organization allows a wide-angle view of Dickinson's poetic development, from the sometimes-clunky rhyme schemes of her juvenilia, including valentines she wrote in the early 1850s, to the gloomy, hell-obsessed writings from her last years. Quite a difference from requisite Dickinson entries in literary anthologies: "There's a certain Slant of light," "Wild Nights--Wild Nights!" and "I taste a liquor never brewed."

The book was compiled from Thomas H. Johnson's hard-to-find variorum from 1955. While some explanatory notes would have been helpful, it's a prodigious collection, showcasing Dickinson's intractable obsession with nature, including death. Poem 1732, which alludes to the deaths of her father and a onetime suitor, illustrates her talent:

My life closed twice before its close;
It yet remains to see
If Immortality unveil
A third event to me,

So huge, so hopeless to conceive
As these that twice befell.
Parting is all we know of heaven,
And all we need of hell.

The musicality of her punctuation and the outright elegance of her style--akin to Christina Rossetti's hymns, although not nearly so religious--rescue the poems from their occasional abstruseness. The Complete Poems is especially refreshing because Dickinson didn't write for publication; only 11 of her verses appeared in magazines during her lifetime, and she had long-resigned herself to anonymity, or a "Barefoot-Rank," as she phrased it. This is the perfect volume for readers wishing to explore the works of one of America's first poets.

R. W. Franklin was Director of the Beinecke Rare Book & Manuscript Library, Yale University. He is the recipient of the Emily Dickinson International Society’s Award for Outstanding Contribution.

3. The Poems of Emily Dickinson: Reading Edition (Paperback or Softback)