Items related to How the Indians Lost Their Land: Law and Power on the...

Banner, Stuart How the Indians Lost Their Land: Law and Power on the Frontier

How the Indians Lost Their Land: Law and Power on the Frontier 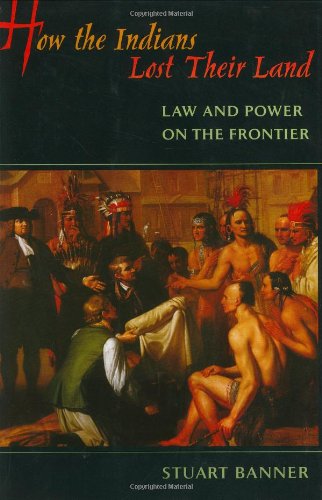 Between the early seventeenth century and the early twentieth,
nearly all the land in the United States was transferred from American
Indians to whites. This dramatic transformation has been understood in two very different ways--as a series of consensual transactions, but also as a process of violent conquest. Both views cannot be correct. How did Indians actually lose their land?

Stuart Banner provides the first comprehensive answer. He argues that neither simple coercion nor simple consent reflects the complicated legal history of land transfers. Instead, time, place, and the balance of power between Indians and settlers decided the outcome of land struggles. As whites' power grew, they were able to establish the legal institutions and the rules by which land transactions would be made and enforced.

This story of America's colonization remains a story of power, but a more complex kind of power than historians have acknowledged. It is a story in which military force was less important than the power to shape the legal framework within which land would be owned. As a result, white Americans--from eastern cities to the western frontiers--could believe they were buying land from the Indians the same way they bought land from one another. How the Indians Lost Their Land dramatically reveals how subtle changes in the law can determine the fate of a nation, and our understanding of the past.

Stuart Banner is Norman Abrams Professor of Law at the University of California, Los Angeles.

In deceptively simple prose, Stuart Banner lays out the complexities and contradictions of the long history of how Anglo-Americans justified the dispossession of Native Americans. His even-handed exploration of the moral gymnastics necessary for lawyers, politicians, and writers to make expropriation seem logical and Native participation voluntary breathes new life into the old saying about the pen proving mightier than the sword. (Daniel K. Richter, author of Facing East from Indian Country: A Native History of Early America)

In a subtle and sometimes startling reinterpretation of 18th and 19th century North American land transfers, Stuart Banner shows how relentlessly expansionary colonial powers met active and savvy Indians who worked to protect their interests as best they could. In the end, it was the English and American power to declare what was lawful that transformed power into right and facilitated increasingly involuntary land transfers at extraordinarily low prices, leaving the Indians worse off than before and bereft of a continent. (Joseph William Singer, Professor of Law, Harvard Law School)

Banner's well-documented history addresses the question of how repeated land sales drove Indians west, with a careful detailing of transactions from the 1600s to the 1900s. Did the Indians think they were agreeing only to 'share resources,' and were the English aware of the Indians' increasing poverty as a result of these one-sided transactions? The author describes how land sales changed from contracts between private parties to treaties between sovereign nations after the end of the French and Indian War in 1763, followed by the convenient perception of Native Americans not as owners of their land but merely
as occupants. (Deborah Donovan Booklist 2005-10-01)

[An] important new study...Despite the common belief that colonists simply took what they wanted by right of conquest, Banner shows that English colonial policy recognized Indians as legitimate owners of the land. That policy was continued by the American nation-state. If the colonies--or, later, the US federal government--wanted Indian land, it had to be purchased or otherwise obtained by cession through legitimate treaty. This policy, Banner argues, developed not out of respect for Indians but out of concern for settlers. After all, it was far less expensive to purchase land than to expend the blood and treasure required to seize it. And deeds of sale or treaties of cession provided a much firmer legal foundation for a property system than did wars of conquest. Banner acknowledges that raw power was important. As settlers grew stronger in relation to Indians, he argues, fraud and violence became more widespread. Yet the legal formalities were preserved. (John Mack Faragher Bookforum 2006-02-01)

Stuart Banner has written an intriguing account examining the dynamic and convoluted territorial, legal, political, and economic relationships among indigenous nations and colonial nations, particularly Great Britain, and its principal successor, the United States...Banner provides, especially in the first two-thirds of the book, a fresh perspective--utilizing a variety of high quality original and secondary materials--on one of the most crucial questions that has animated indigenous/nonindigenous relations since the arrival of Europeans: how and why did Native peoples lose ownership of ninety-eight percent of their lands to non-Natives? This powerful question has generally occupied the attention of many people inside and outside the academy, but very few have explored it to the depth that Banner has...This is a text that is quite striking, informative, and one that will be useful to a variety of audiences: historians, legal scholars, political scientists, and sociologists, among others...I hope it enjoys a wide readership as it deftly addresses important questions regarding land and sovereignty that continue to have great legal, property, and moral potency today. (David E. Wilkins American Historical Review)

Banner's book, which is well suited for undergraduate use, is a wonderful introduction to a surprisingly complex subject. Banner covers with brevity and style the entire period from the first English settlements through the General Allotment Act of 1887. He discusses the land policies pursued by the English and American governments as well as the intellectual and legal justifications for those policies...Banner skillfully avoids casting this tale as a simple morality play. (Michael Leroy Oberg New England Quarterly)

A wonderful introduction to a surprisingly complex subject. Banner covers with brevity and style the entire period from the first English settlements through the General Allotment Act of 1887. (Michael Leroy Oberg New England Quarterly 2006-06-01)

Employing an impressive array of the latest Native American scholarship, as well as published primary documents, Banner argues--in opposition to what he claims is a "near-consensus among historians and lawyers"--that by the end of the seventeenth century the English normally acknowledged that Indian land had to be obtained by contract, not by force...The valuable work clearly explains the sometimes obtuse legal framework that the English and Americans used to dispossess the Indians of the United States of most of their lands, a subject that has confused many scholars of Native American history, as well as Native Americans themselves, for a very long time. (F. Todd Smith Historian)

Banner contributes a major new conceptualization and many fresh insights into how the Indians lost their land...[the] studies compel readers to reconsider many aspects of Indian history, identity, and issues related to removal, migration, and life on reservations...Both specialists and nonspecialists will find these studies interesting and beneficial...they raise important questions and answer them in detail with new discoveries and insights. (Rodger C. Henderson Canadian Journal of History)

1. How the Indians Lost Their Land : Law and Power on the Frontier

2. How the Indians Lost Their Land: Law and Power on the Frontier