Items related to The Declaration of Independence: A Global History

Armitage, David The Declaration of Independence: A Global History

The Declaration of Independence: A Global History 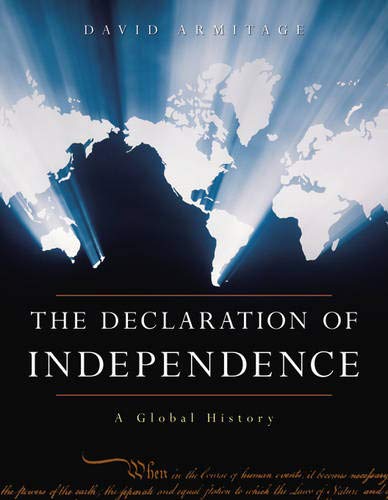 In a stunningly original look at the American Declaration of Independence, David Armitage reveals the document in a new light: through the eyes of the rest of the world. Not only did the Declaration announce the entry of the United States onto the world stage, it became the model for other countries to follow.

Armitage examines the Declaration as a political, legal, and intellectual document, and is the first to treat it entirely within a broad international framework. He shows how the Declaration arose within a global moment in the late eighteenth century similar to our own. He uses over one hundred declarations of independence written since 1776 to show the influence and role the U.S. Declaration has played in creating a world of states out of a world of empires. He discusses why the framers' language of natural rights did not resonate in Britain, how the document was interpreted in the rest of the world, whether the Declaration established a new nation or a collection of states, and where and how the Declaration has had an overt influence on independence movements--from Haiti to Vietnam, and from Venezuela to Rhodesia.

Included is the text of the U.S. Declaration of Independence and sample declarations from around the world. An eye-opening list of declarations of independence since 1776 is compiled here for the first time. This unique global perspective demonstrates the singular role of the United States document as a founding statement of our modern world.

David Armitage is Professor of History at Harvard University.

In this brilliant work, Armitage not only illuminates the American founding but offers a provocative perspective on the modern world as a whole. There is nothing on the American Declaration that compares with this extraordinary book. (Peter S. Onuf, author of Jefferson's Empire)

David Armitage's fascinating and lucidly written book will establish itself as a key contribution to what is virtually a new field of study: the transnational history of ideas. (Christopher Bayly, co-author of Forgotten Armies and Forgotten Wars)

This concise, readable book makes a powerful contribution to scholarship on the Declaration of Independence. From a global perspective, it seems, the document’s significance lies less in its second paragraph (‘all men are created equal’) than in its conclusion, where it declared independence. Armitage’s argument might provoke some opposition, but his evidence—ignored by previous scholars—needs to be taken very seriously. (Pauline Maier, author of American Scripture)

Armitage presents and analyzes the global influence of the Declaration of Independence, showing the document as a powerful global symbol and a means of generating self-governing nations elsewhere during the 50 years after its creation. In order to understand the declaration's international impact, Armitage examines the development of like declarations in other nations during the 19th century, presenting samples of them from around the world. He seeks to recover 'the meaning of independence that the Declaration claimed for the United States,' and he raises thoughtful questions about the political interdependence among world states. His new perspectives concerning both the domestic and the international context of the declaration demonstrate its importance in the formation of nations as the primary units in global politics. (Steven Puro Library Journal 2006-12-15)

David Armitage's concise and penetrating book, The Declaration of Independence, exemplifies the potential strengths of a truly transnational approach to the writing of history...By looking beyond the borders of the USA, Armitage alters our perspective on the meaning of the Declaration...David Armitage has shed new light on some of the most important questions about the foundations of the modern world by examining a document that is both time-bound and timeless. (Adam I. P. Smith Times Literary Supplement 2007-06-08)

More so than the Constitution...the Declaration has also become a global document, a piece of intellectual and political common property that has transcended the circumstances of its creation and perhaps even the intentions of its authors. Surprisingly, this afterlife has not received systematic and "global" treatment by historians, and David Armitage is to be congratulated on his concise and well-written study of the Declaration as, to use his own words, 'an event, a document, and the beginning of a genre.' He shows that it was first and foremost an "international" document, driven by the need to establish the legitimacy of the united colonies within the state-system and thus their right to conclude alliances against Britain. (Brendan Simms Wall Street Journal)

A provocative study of a subject about which one might have thought there was nothing new to report. (Michael Kenney Boston Globe 2007-02-01)

The Declaration of Independence has long been regarded as national property. But where US popular lore sees mirrored in its words the image of the nation, David Armitage sees the reflections of a wider world...this is the story of the emergence of a world of states from a world of empires...Without a doubt, this global history testifies to the power of words and ideas. (Glenda Sluga Harvard International Review)

The Declaration of Independence: A Global History