Monkey Trials and Gorilla Sermons: Evolution and Christianity from Darwin to Intelligent Design (New Histories of Science, Technology, and Medicine) 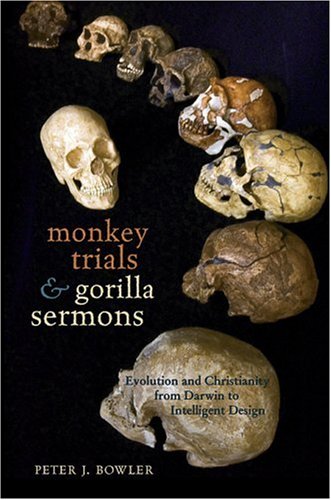 From the beginning, Darwin’s dangerous idea has been a snake in the garden, denounced from pulpits then and now as incompatible with the central tenets of Christian faith. Recovered here is the less well-known but equally long history of thoughtful engagement and compromise on the part of liberal theologians. Peter J. Bowler doesn’t minimize the hostility of many of the faithful toward evolution, but he reveals the existence of a long tradition within the churches that sought to reconcile Christian beliefs with evolution by finding reflections of the divine in scientific explanations for the origin of life. By tracing the historical forerunners of these rival Christian responses, Bowler provides a valuable alternative to accounts that stress only the escalating confrontation.

Our polarized society, Bowler says, has all too often projected its rivalries onto the past, concealing the efforts by both scientists and theologians to find common ground. Our perception of past confrontations has been shaped by an oversimplified model of a “war” between science and religion. By uncovering the complexity of the debates sparked by Darwin’s theory, we might discover ways to depolarize our own debates about where we came from and why we are here.

Bowler, a professor of the history of science at Queen's University in Belfast, aims to show that "the renewed state of war between fundamentalists and atheistic Darwinists is not the only game in town," because "there have always been religious thinkers looking for a middle way" to integrate Christian and evolutionary ideas. While not himself an advocate of any "middle way," Bowler is a religious skeptic. He believes this stream of thought deserves more attention. Alongside outbreaks of controversy such as the Huxley-Wilberforce debates, the Scopes trial or contemporary battles over science education, Bowler portrays a broad movement, spearheaded by liberal Christians and religiously inclined evolutionists, to interpret evolution as God's plan. Integrating cultural and political factors into the historical description, Bowler sees a great deal at stake. Political and social beliefs about competition, cooperation, and human improvability also come into play, as well as classic theological questions of suffering, freedom, and moral responsibility or more recently, the value of animals and the environment...This is a well-balanced survey that does justice to the complexity of the encounter and the variety of possible responses. (Publishers Weekly 2007-07-09)

In his fascinating, thorough, and authoritative book Monkey Trials and Gorilla Sermons: Evolution and Christianity from Darwin to Intelligent Design, Peter J. Bowler pays particular attention to theologians and scientists who have found a degree of harmony between evolution and Christianity. (Thomas Dixon Times Literary Supplement 2007-11-16)

Peter Bowler, past president of the British Society for the History of Science, has spent most of his career demystifying Darwin's significance without also debunking the idea of biological evolution. This gives him just the right critical distance to do a history of the various evolution-creation controversies in the English-speaking world. This book, which includes a brief discussion of the recent U.S. dispute over intelligent design theory, achieves its stated goal well. (Steve Fuller Times Higher Education Supplement 2007-12-14)

Monkey Trials and Gorilla Sermons is a notable achievement. The book’s structure is admirably clear and efficient...exceptionally well-crafted for its intended general audience. Indeed, reading Bowler’s book is a bit like watching a major league baseball player take batting practice. Even when routine, it is satisfying to watch a professional make something difficult look easy. (Matthew Day Church History 2008-06-01)

Peter J. Bowler points out that extreme biblical literalism--of the sort that insists that creation took place as Genesis depicts it--may be more widespread now even than in 1859, when The Origin of Species was published. (Charles McGrath New York Times 2008-12-24)

1. Monkey Trials and Gorilla Sermons: Evolution and Christianity from Darwin to Intelligent Design (New Histories of Science, Technology, and Medicine)

2. Monkey Trials and Gorilla Sermons: Evolution and Christianity from Darwin to Intelligent Design (New Histories of Science, Technology, and Medicine)

3. Monkey Trials and Gorilla Sermons: Evolution and Christianity from Darwin to Intelligent Design (New Histories of Science, Technology, and Medicine)

4. Monkey Trials and Gorilla Sermons: Evolution and Christianity from Darwin to Intelligent Design (New Histories of Science, Technology, and Medicine)

7. Monkey Trials and Gorilla Sermons: Evolution and Christianity from Darwin to Intelligent Design (New Histories of Science, Technology, and Medicine)