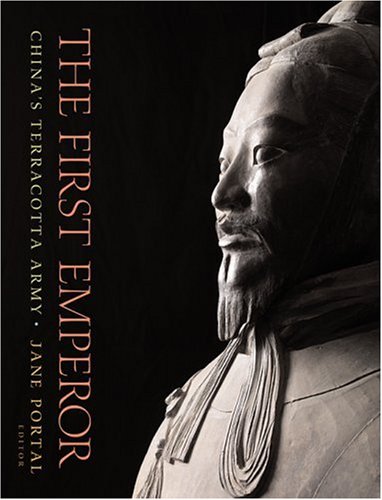 Standing guard around the tomb of Qin Shihuangdi, the ranks of a terracotta army bear silent witness to the vast power of the First Emperor of the Qin Dynasty, who unified China in 221 BCE. Six thousand warriors and horses make up the army, while chariots, a military guard, and a command post complete the host. A new look at one of the most spectacular finds in the annals of archaeology, this book also considers the historical and archaeological context of the Terracotta Army, as well as the extensive research and excavation carried out since its discovery in 1974.

In richly illustrated chapters, experts in the field describe the Qin's rise and military conquest, the empire's ideology and practices, and the emperor's achievements and legacy. The authors examine the site itself, including new discoveries such as terracotta bureaucrats, acrobats, and strongmen, life-size bronze birds, hundreds of suits of stone armor, and terracotta warriors with colored faces preserved with new technology.

From explorations of the massive mausoleum and the rituals that surrounded it, to explanations of the actual manufacture of the Terracotta Army, the book offers a detailed and authoritative tour of one of ancient history's most eloquent memorials, with all it says of China's long and coherent cultural past--and future potential.

Jane Portal is an Assistant Keeper in the Department of Asia in the British Museum, where she is responsible for the Chinese collections. Her publications include Gilded Dragons, Chinese Love Poetry, and the award-winning British Museum Book of Chinese Art.

This beautifully illustrated catalog accompanies a touring exhibition on the Terracotta Army coming directly from China. Editor Portal has done an excellent job. Few historical figures changed the course of history like the First Emperor (d. 210 BCE). Having conquered six rival powers, he created China's first empire and bequeathed a political legacy that has persisted to this day. Modern interest is kept alive not only by Chairman Mao's unabashed endorsement, but by the recent discovery of an army of life-size terracotta soldiers and officers near the emperor's tomb in Xi'an, hailed all over the world as an archaeological wonder. A humongous museum built on the site has become a major tourist attraction. (V. C. Xiong Choice 2008-09-01)