Items related to American Mediterranean: Southern Slaveholders in the...

American Mediterranean: Southern Slaveholders in the Age of Emancipation 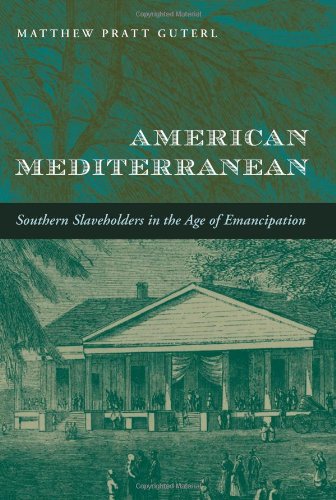 How did slave-owning Southern planters make sense of the transformation of their world in the Civil War era? Matthew Pratt Guterl shows that they looked beyond their borders for answers. He traces the links that bound them to the wider fraternity of slaveholders in Cuba, Brazil, and elsewhere, and charts their changing political place in the hemisphere. Through such figures as the West Indian Confederate Judah Benjamin, Cuban expatriate Ambrosio Gonzales, and the exile Eliza McHatton, Guterl examines how the Southern elite connected―by travel, print culture, even the prospect of future conquest―with the communities of New World slaveholders as they redefined their world. He analyzes why they invested in a vision of the circum-Caribbean, and how their commitment to this broader slave-owning community fared. From Rebel exiles in Cuba to West Indian apprenticeship and the Black Codes to the “labor problem” of the postwar South, this beautifully written book recasts the nineteenth-century South as a complicated borderland in a pan-American vision.

In an ambitious and compelling book, Matthew Pratt Guterl asks us to rethink accounts of race, slavery, and national identity within a framework of the Americas. In revealing the hemispheric underpinnings of the South's master class of slaveholders, he sheds important new light on American history. This is also a wonderful book to read. Guterl is a remarkably elegant, at times virtuosic, writer. (Caroline Levander, author of Cradle of Liberty)

A model of transnational history that reconceives the era of emancipation from a truly exciting hemispheric perspective. Guterl decisively demonstrates that the post-emancipation South cannot be properly understood unless it is viewed in connection with those parts of the Caribbean and Central and South America that also confronted labor problems in the aftermath of abolition. (Steven Mintz, author of Huck's Raft: A History of American Childhood)

With this elegantly written study, Guterl powerfully re-situates the U.S. South within the 'American Mediterranean,' and in the process he uncovers the story of a Southern, slave-holding master class that understood itself both as 'American' and as a part of the wider arena of slave-holding power in the New World. With its focus on the complex relation between labor and transnationalism, this is a timely and much needed book. (Anna Brickhouse, University of Virginia)

This startlingly original, interdisciplinary study compels one to think afresh about the geographical status of the American South. Guterl marshals an impressive range of materials to demonstrate how Southern slaveholders participated in a pan-American class whose shared consciousness relocated them within a circum-Atlantic topography that included the United States, the Caribbean, and Latin America. In uncovering this heretofore ignored cartography, he has revealed a deeper history of New World slavery and freedom. (Donald Pease, Dartmouth College)

Guterl's work expertly weaves together many of the themes of the comparative struggles of 'masters without slaves,' and more generally of postemancipation societies. (P. Harvey Choice 2009-05-01)

[This] probative and rich book paints a compelling portrait of a region both shaped by and contributing to the dynamic and transnational processes of nineteenth-century modernity...Guterl's study reminds us how little we actually know about Civil War diplomacy with non-European powers. His use of hemispheric studies and discussion of the coolie trade imply, without expressly stating, the need to broaden our Atlantic approach to also include the Pacific Rim. (Brian Schoen Journal of Southern History 2011-02-01)

[A] compelling book...American Mediterranean is a model of effectively deployed interdisciplinary method. In service to his larger arguments, Guterl plumbs the complex depths of traditional sources like newspapers, personal correspondence and travel accounts, more surprising archival materials like the creolized fashions worn by Louisiana plantation mistresses, and even the racialized iconography stamped on southern currencies (his analysis of these money aesthetics was one of the book's highlights for me). Guterl is at his best when engaged in close textual readings. His enlightening and elegant exegesis of Martin Delany's 1859 radical antislavery novel, Blake, or the Huts of America, for example, shows convincingly how Delany unveiled "the planter's sense of slavery" as "cosmopolitan and global, and prospering...outside of the authority of the nation-state" ...American Mediterranean is a beautifully written, inventively argued study, the kind of infectious book that makes one think, and raises a lot of interesting questions...What Guterl has given us is a worthwhile study of how one national group of slaveholding elites imagined this wider transnational polity. (Daniel Rood Caribbean Studies 2009-07-01)

Guterl's work is the first piece of history to explore in-depth the South and the Caribbean during the era surrounding the Civil War...The author accomplishes his goal of tying the South to the Caribbean culturally, economically, and socially. Historians of the Old South, the Atlantic World, and the sectional crisis all will benefit from this book. (Miles Smith South Carolina Historical Magazine 2011-01-01)

1. American Mediterranean: Southern Slaveholders in the Age of Emancipation