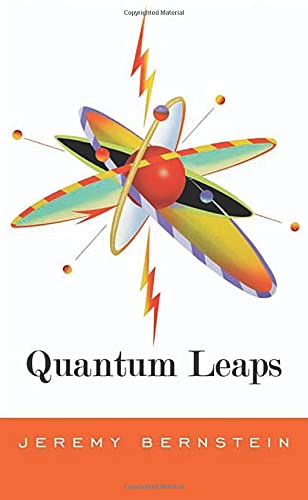 In 1953, reflecting on early ventures in quantum theory, J. Robert Oppenheimer spoke of terror and exaltation, of history happening in a realm so remote from common experience that it was “unlikely to be known to any poet or historian.” Yet now, anyone can Google “quantum theory” and find more than 34 million entries—from poets and historians, certainly, as well as film critics and Buddhist monks. How—and how pervasively—quantum mechanics has entered the general culture is the subject of this book, an engaging, eclectic, and thought-provoking look at the curious, boundlessly fertile intersection of scientific thought and everyday life.

Including recollections of encounters with the theory and the people responsible for it, Jeremy Bernstein’s account ranges from the cross-pollination of quantum mechanics with Marxist ideology and Christian and Buddhist mysticism to its influence on theater, film, and fiction. Along the way, Bernstein focuses on those—such as Niels Bohr, the Dalai Lama, W. H. Auden, and Tom Stoppard—who have made quantum physics; who have argued over it, pondered it, or taken literary inspiration from it, and who have misunderstood, misconstrued, or misapplied it. One person in particular supplies a narrative thread: John Bell, a notable yet underappreciated physicist who did groundbreaking research in quantum physics. In Bell’s story, Bernstein provides a uniquely readable account of what physicists call the “measurement problem.”

Quantum Leaps is a lively, erudite book on a subject that Bernstein has lived with for most of its history. His experience and deep understanding are apparent on every page.

Jeremy Bernstein is the author of many books on science for the general reader, including Plutonium: A History of the World’s Most Dangerous Element and Oppenheimer: Portrait of an Enigma. He is a former staff writer for the New Yorker.

Jeremy Bernstein is as good a writer as you can find among scientists. (Steven Weinberg)

Bernstein, a former New Yorker staff writer and prolific popular-science author, embarks on an almost quixotic attempt to explain the mysteries of quantum mechanics. It's a daunting topic. The legendary nuclear physicist Niels Bohr once said, "Those who are not shocked when they first come across quantum theory cannot possibly have understood it." Bernstein seamlessly interweaves the story of his own growing fascination with quantum theory and the people who were influential in nurturing his career with the theoretical conundrums that abound in quantum theory. He also is very eclectic in the sources he draws on to explain some of the more remarkable aspects of quantum theory: the Dalai Lama, W. H. Auden and the plays of Tom Stoppard all provide relevant points of interest. The scientific explanations that comprise much of the book--the problems of measurement and entanglement, how particles of energy and matter can become predictably correlated over great distances--are earnest and, because of the nature of the topic, unavoidably difficult for the uninitiated. But this is a labor of love, and serious science readers will find it worthwhile. (Publishers Weekly 2009-08-03)

Former New Yorker science writer Jeremy Bernstein revisits his own encounters with the quantum world, first as a student at Harvard and then throughout his storied career, which features a cast of characters including W. H. Auden, J. Robert Oppenheimer and Tom Stoppard. Along the way, he discusses the strange intersections of quantum mechanics with Marxism and mysticism. This is an eclectic book by someone who understands the physics and has observed its cultural consequences first-hand. (Saswato R. Das New Scientist 2009-10-10)

No subject in recent memory has generated as much nonsense as the weird realm of quantum mechanics...The great science-writer Jeremy Bernstein provides a wonderful antidote in this lucid, witty book, which draws on his firsthand acquaintance with many of the principal players in the development of quantum theory. (John Wilson Christianity Today 2009-09-01)

[Bernstein's] exposition of the quantum conundrums is clear and bracing, and a stimulating challenge. Quantum Leaps is an intellectual curiosity, redolent of the strange mental landscape inhabited by the world's greatest intellects. (Peter Forbes The Independent 2010-01-07)

A physicist-turned-prolific-writer, [Bernstein] is among the most engaging and thoughtful of quantum explainers, and Quantum Leaps provides one of the best concise guides available to what the fuss is all about. (Tom Siegfried Science News 2009-12-05)