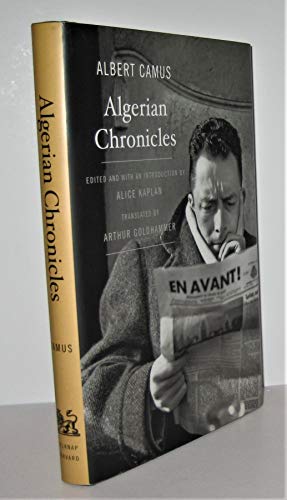 More than fifty years after Algerian independence, Albert Camus’ Algerian Chronicles appears here in English for the first time. Published in France in 1958, the same year the Algerian War brought about the collapse of the Fourth French Republic, it is one of Camus’ most political works—an exploration of his commitments to Algeria. Dismissed or disdained at publication, today Algerian Chronicles, with its prescient analysis of the dead end of terrorism, enjoys a new life in Arthur Goldhammer’s elegant translation.

“Believe me when I tell you that Algeria is where I hurt at this moment,” Camus, who was the most visible symbol of France’s troubled relationship with Algeria, writes, “as others feel pain in their lungs.” Gathered here are Camus’ strongest statements on Algeria from the 1930s through the 1950s, revised and supplemented by the author for publication in book form.

In her introduction, Alice Kaplan illuminates the dilemma faced by Camus: he was committed to the defense of those who suffered colonial injustices, yet was unable to support Algerian national sovereignty apart from France. An appendix of lesser-known texts that did not appear in the French edition complements the picture of a moralist who posed questions about violence and counter-violence, national identity, terrorism, and justice that continue to illuminate our contemporary world.

It was the last book Camus published in his lifetime, and it appears now in its entirety for the first time in English, expertly translated by Arthur Goldhammer. The editor, Alice Kaplan, has added six texts to Camus's original selection in an appendix, to further illuminate Camus's relation to Algeria... As the writings in Algerian Chronicles

by the right for his condemnation of government policies, scorned by the left for his inability to imagine an independent Algeria from which the French would be absent...As Kaplan points out, we cannot know how he would have reacted to the final years of the war, or to the independence that followed. We do know that his ethical positions are

Algerian Chronicles is a collection of journalistic writings published in 1958, when the crisis in Algeria posed a persistent threat to the government of France. It was to be Camus's final book and appears in retrospect as a summing-up of his feelings about his birthplace...These remarkably mature dispatches, written when he was 25, show that Camus was anxious from the start about the political relationship between his native country and the mainland...The impetus behind the repeated pleas for constructive dialogue that occupy the later parts of Algerian Chronicles was personal as much as political...Algerian Chronicles, never before translated in its entirety, is a document worth having. (James Campbell Wall Street Journal 2013-05-03)

[A] brilliant translation...Camus fell silent after this effort, but for one exception. In 1958, while the ‘sale guerre’ in his native country grew ever more dirty, he returned to his first trade, journalism. Gathering his newspaper articles and commentaries on Algeria, he published them under the title Actuelles III. In his preface, he lambasts France’s colonial policy, castigates the use of torture and terrorism by both sides, and defends innocent French and Arabs at the mercy of these violent designs. Yet, he concludes, his book ‘is among other things a history of a failure.’ But noble failures like the Algerian Chronicles are both timeless and timely. (Robert Zaretsky Times Literary Supplement 2013-10-11)

Camus was a far more engaged writer than his critics have allowed, and the essays, columns and speeches collected here make a strong case for his continued relevance...Today, although his failure to support full independence for Algeria seems off the mark, Camus stands as a powerful voice against violence and extremism, and the very late appearance of these essays in English could not have come at a better time...With the future of the Arab spring uncertain and with terrorism back on the front page, these Algerian Chronicles are not only history. They're also guides for how to be just in a difficult world. (Jason Farago NPR Books 2013-05-13)

Algerian Chronicles...comprises everything Camus wrote on Algeria...Camus's writing on Kabylia is a marvel of eloquence. His sympathy for the people, his critique of the colonial regime, his pain over the injustices that he witnesses--all thrilling. Seventy years after he wrote these pieces the reader is still penetrated by their literary beauty. But at no time in Algerian Chronicles are we listening to the speaking voice of a revolutionary. It is the voice of a despairing citizen who does not want his country's government overthrown; he wants it to do better by its people. He wants France to remain in Algeria, but to honor its own founding myths of liberty, equality, and fraternity. The pieces in Algerian Chronicles that were written years later in France, during the war for independence, are repetitive pleas for each side to stop demonizing the other, for human decency to prevail.
(Vivian Gornick Boston Review 2013-07-01)

The singular importance of Algerian Chronicles is that it brings together for the first time in English all of Camus's writings on Algeria, ranging over his early journalism covering the famine in Kabyle in 1939 to his appeals for reason and justice in Algeria in 1958. Beautifully translated by Arthur Goldhammer, they reveal Camus not so much as a philosopher (or 'ponderous metaphysician' as Said called him) but as something like a French George Orwell. Certainly, in all these essays he demonstrates a most un-Parisian aversion to abstraction and a taste for the concrete detail that reveals the reality of a situation...There is a new generation of readers in Algeria who are beginning to understand how [Camus] felt: torn between opposing forms of terror, neither of which promised justice or redemption. Algerian Chronicles is a beautiful and significant illustration of the complexities of that dilemma. (Andrew Hussey Literary Review 2013-05-01)

[Algerian Chronicles] has not, for the most part, been regarded as one of Camus's 'important' works...This is, perhaps, an oversight. At a historical moment when it seems crucial to the human prospect to think intelligently about terrorism and other forms of political violence, the thinking Camus does in Algerian Chronicles may strike us, if we open ourselves to it, as necessary, cogent, and sane...What is clear from Algerian Chronicles is that Camus's compassion could be triggered by the suffering of any human being, and that his political and moral concern was with any innocent person who might be made the victim of violence in the name of any political cause...Algerian Chronicles may have suffered the fate of being published at a time when those who most needed to hear what it had to say were entirely unable to read it with an open mind. It is possible that, now that some decades have passed, it will find a second life. We Americans would be well advised to pay it serious attention. After more than a decade in which the United States has chosen to respond to the specter of lawless terrorism with forms of violence some have regarded as state-sanctioned terrorism--years during which, as in the Algerian war, the violence inflicted by each side has been used to justify the violence inflicted by the other, and during which the use of torture by American military and security forces has been not only condoned but applauded by a large segment of the American citizenry--Camus's reflections on these subjects seem to address us directly. (Troy Jollimore Barnes & Noble Review 2013-06-13)

Algerian Chronicles...has been invisibly translated by Arthur Goldhammer and prefaced perceptively by Alice Kaplan...All [the essays] are a model of engaged journalism: scrupulous and exhaustive in the facts, telling in colorful anecdote, reasoned in argument, with no hint of sarcasm or anger. Apart from their historical interest, Camus's essays show us two things. One is it is possible to be politically engaged without foaming at the mouth. The other is the more things change in what historian Ian Morris calls 'the arc of instability,' from central Africa to Pakistan, the more they stay the same. Further, they remind us that a great deal of the horror going on there today is the legacy of 19th-century European colonialism and superpower maneuvering in the Cold War...Through all these bloody convulsions and those of the wider region, Camus's central call--to spare the lives of noncombatants--echoes still...After Iraq, after Syria, after the still unexplained suspension of international law in deadly American drone strikes, after the constant bombing of marketplaces and mosques now that asymmetrical war has made obsolete the Geneva Conventions, Camus's voice seems naively idealistic. The world needs that kind of naivete more than ever. (Miriam Cosic The Australian 2013-06-08)

Despite his lucidity and his avowed anti-colonialism, Camus during his lifetime failed to accept that Algeria should or could be permanently separated from France; and, as Kaplan rightly points out, his premature death in 1960 means that we can never know how he would have reacted to the agreements enacting that separation...At the same time, as a record of passionate insights into the processes involved, the book still makes absorbing reading, not least because of the many portentous analogies between what happened in Algeria and what is happening in much of our world today... Algerian Chronicles is infused with bitter-sweet nostalgia for a personal lost paradise, a not infrequent ingredient of Camus's writing generally. But the book transmits a wider angry grief in its demonstration that the most humane and reasoned ideals seldom work to diminish the destructive and self-mutilating brutalities that humanity, endlessly, inflicts on itself. Camus has been well served here by Arthur Goldhammer, who is probably the most gifted living translator into English of French texts. Goldhammer, in his translator's note, describes the challenges of capturing the purity, restraint, and discipline of Camus's prose; and he expresses the hope that his work has done justice to what he calls 'a precious document of a soul's torment lived in real rather than eternal time.' He need not have worried: the author's voice resounds with eerie clarity. (Colin Nettlebeck Australian Book Review 2013-05-01)

History has proven Camus right when he warned in 1955 that those who support terror and call for massacres, ‘no matter which camp they come from and no matter what argument or folly drives them, are in fact calling for their own destruction.’ A lesson the world, alas, has still not learned. (Micah Mattix New Criterion 2013-10-01)