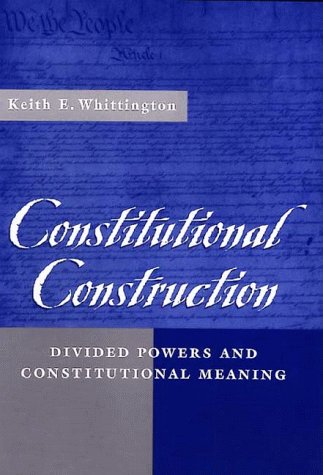 This book argues that the Constitution has a dual nature. The first aspect, on which legal scholars have focused, is the degree to which the Constitution acts as a binding set of rules that can be neutrally interpreted and externally enforced by the courts against government actors. This is the process of constitutional interpretation. But according to Keith Whittington, the Constitution also permeates politics itself, to guide and constrain political actors in the very process of making public policy. In so doing, it is also dependent on political actors, both to formulate authoritative constitutional requirements and to enforce those fundamental settlements in the future. Whittington characterizes this process, by which constitutional meaning is shaped within politics at the same time that politics is shaped by the Constitution, as one of construction as opposed to interpretation.

Whittington goes on to argue that ambiguities in the constitutional text and changes in the political situation push political actors to construct their own constitutional understanding. The construction of constitutional meaning is a necessary part of the political process and a regular part of our nation's history, how a democracy lives with a written constitution. The Constitution both binds and empowers government officials. Whittington develops his argument through intensive analysis of four important cases: the impeachments of Justice Samuel Chase and President Andrew Johnson, the nullification crisis, and reforms of presidential-congressional relations during the Nixon presidency.

Mr. Whittington sees the Constitution not as an immutable legal document but as something more fluid and more mysterious, a powerful and authoritative force which constantly influences political outcomes while itself being subject to politics. Battles over constitutional construction are of course political battles...[and] Mr. Whittington has interesting things to say about the way these conflicts play out. (Peter A. Jay Washington Times)

This book is an important addition to modern constitutional theory. Whittington brings to life an old but not well understood idea--that constitutional development is the product of judicial interpretation and binding rules and of political practice. (J. B. Grossman Choice)

This is a superb, pathbreaking book that demonstrates the dual nature of constitutional change. Through a subtle analysis of congressional-presidential politics, Whittington convincingly argues that the process by which constitutional meaning is defined is not solely the purview of the Supreme Court and lesser courts. He shows that the Constitution gains meaning as a result of the politics of construction engaged in by political actors seeking political and policy objectives...[Constitutional Construction] is must reading for a wide range of scholars of American institutions and political development, law and courts, history, and American political thought. (Ronald Kahn American Political Science Review)

Whittington's book is among the most important recently published about constitutional theory and history. (Mark Tushnet Journal of Interdisciplinary History)

Constitutional Construction provides a needed corrective to the works of constitutional theorists who focus solely on jurisprudential issues...Whittington concludes that scholars need to look beyond the courts and recognize the multifaceted nature of the Constitution. (Michael Ross Journal of Southern History)