Items related to In a Different Voice: Psychological Theory and Women’...

In a Different Voice: Psychological Theory and Women’s Development 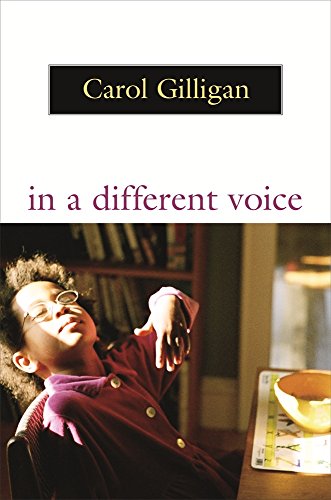 This is the little book that started a revolution, making women's voices heard, in their own right and with their own integrity, for virtually the first time in social scientific theorizing about women. Its impact was immediate and continues to this day, in the academic world and beyond. Translated into sixteen languages, with more than 700,000 copies sold around the world, In a Different Voice has inspired new research, new educational initiatives, and political debate―and helped many women and men to see themselves and each other in a different light.Carol Gilligan believes that psychology has persistently and systematically misunderstood women―their motives, their moral commitments, the course of their psychological growth, and their special view of what is important in life. Here she sets out to correct psychology's misperceptions and refocus its view of female personality. The result is truly a tour de force, which may well reshape much of what psychology now has to say about female experience.

Carol Gilligan is University Professor at the New York University School of Law.

Theories of moral development are not mere abstractions. They matter―to the way children are raised, to female and male self-esteem, as ammunition for personal and political attack―and that is why Carol Gilligan's book is important... [It] is consistently provocative and imaginative. (Carol Tavris New York Times Book Review)

Girls in our society learn early on that they are expected to behave in certain ways. In her 1982 book In a Different Voice, Carol Gilligan, a psychologist at Harvard University, wrote about the powerful messages young girls receive from those around them. Girls are expected to be compliant, quiet and introspective. They soon learn that they should suppress any open expression of aggression or even strong non-compliant feelings. They also learn...to value relationships more than rules. (T. Berry Brazelton, M.D. New York Times Syndicate 2000-09-22)

It has the charge of a revelation... [Gilligan] flips old prejudices against women on their ears. She reframes qualities regarded as women's weaknesses and shows them to be human strengths. It is impossible to consider [her] ideas without having your estimation of women rise. (Amy Gross Vogue)

Gilligan's book is feminism at its best... Her thesis is rooted not only in research but in common sense... Theories of human development are never more limited or limiting than when their bias is invisible, and Gilligan's book performs the vital service of illuminating one of the deepest biases of all. (Alfie Kohn Boston Globe)

A profound and profoundly important book. It poses a challenge to psychology... But it may be just what we need to revitalize our field and bring it into a more meaningful alignment with reality. (Elizabeth Douvan Contemporary Psychology)

To those of us searching for a better understanding of the way men and women think and the different values we bring to public problems and to our private lives, [this book] is of enormous importance. (Judy Mann Washington Post)

An important and original contribution to the understanding of human moral development in both men and women. Carol Gilligan writes with literary grace and a real sensitivity to the women she interviewed... Her book has important implications for philosophical as well as psychological theory. (Lawrence Kohlberg)

Book Description Paperback. Condition: New. Excellent condition. Interior is tight, bright and clean; no underlining, notes or highlighting. Binding is smooth and solid. Paperback cover is clean and sticker free. Minor scuffing and/or corner bumps on the paperback covers due to shelf wear. 100% Satisfaction Guaranteed. All items are carefully enclosed with bubble wrap. We ship promptly and worldwide via US Post and will email you a tracking number. Seller Inventory # SKU0031726

In a Different Voice: Psychological Theory and Women's Development

IN A DIFFERENT VOICE: PSYCHOLOGI