Items related to Public Health and the State: Changing Views in Massachusetts...

Public Health and the State: Changing Views in Massachusetts. 1842-1936 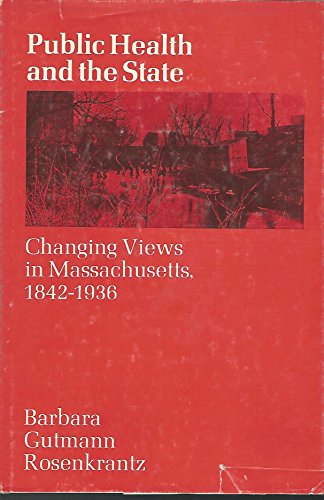 Public Health and the State constitutes both a fine piece of social history and an ideal model for evaluating our current definition of public health. In this thought-provoking account, Ms. Rosenkrantz perceptively traces the development of the Massachusetts State Board of Health--established in 1869 as the first state institution in the United States responsible for preventing unnecessary mortality and promoting all aspects of public health.

This study describes the areas in which state responsibility for deterring disease assumed increased authority after the Civil War. It begins at a time when the definition of health' implied that it could be achieved, supported by the perfectionist belief that a healthy populace--obedient to the laws of nature--guaranteed a sound society. As rapid urban and industrial growth began to sweep the country, however, there was an expressed concern that this expansion threatened the health and morals of the people. During this period, when the etiology of disease was ascribed to a variety of environmental and behavioral factors, the Massachusetts Board developed a comprehensive program of investigation and advice on such diverse issues as housing, water supplies, slaughterhouse conditions, and the use of alcohol.

Later, as specific medical prophylaxis and therapy came to characterize public health policy, the relationship between sanitary science and social reform was redefined by both professional standards and public expectation. The State Board depended less and less upon its ability to influence individual conduct. Laboratory scientists, chemists, and physicians, who tended to describe disease in biological terms, directed public health toward science.

In view of pressing public health problems posed by such hazards as drug abuse and environmental pollution, Ms. Rosenkrantz warns us that it is as important to identify the origins of the social and scientific assumptions regarding public health as it is to discover the biological etiology of disease. The last chapter of Public Health and the State suggests that the goal of perfect health, based upon the ideal concepts of the past, may no longer be a viable objective. For these reasons she views the development of the Massachusetts State Board of Health as "the story of a successful endeavor that can never be re-enacted."

Barbara Rosenkrantz is Lecturer in the History of Science, Harvard University.

Blake has written a book to be recommended without reservation, one which should be available to all students and practitioners of public health. -- George Rosen "American Journal of Public Health" This well-documented study is rewarding both to the historian and to the general reader. The author has tapped original sources and brought together fresh information, scattered through records printed and in manuscript...This book, readable and scholarly, is important to anyone interested in the history of this country. Much can be said for the history of a problem limited in area and scope if it be significantly related to the world beyond...The author begins with the day the Massachusetts Bay Company limited the number of passengers in each ship as a health measure and ends with the dawn of the modern sanitary movement. Because he had to feel his way his book is methodologically as well as substantially valuable. Blake has neglected no source-official, periodical, monographicand at no time does he fail to appreciate that contemporary measures reflected the best knowledge and experience...The story told here is one to inspire pride; it also reveals the need for many more such studies as a prelude to a full account of public health in the United States. -- Charles F. Mullett "American Historical Review"

Book Description Harvard University Press, 1972. Condition: Good. A+ Customer service! Satisfaction Guaranteed! Book is in Used-Good condition. Pages and cover are clean and intact. Used items may not include supplementary materials such as CDs or access codes. May show signs of minor shelf wear and contain limited notes and highlighting. Seller Inventory # 0674722353-2-4

Book Description Brand: Harvard University Press. Hardcover. Condition: VERY GOOD. Pages are intact and are not marred by notes or highlighting, but may contain a neat previous owner name. The spine remains undamaged. Supplemental materials are not guaranteed with any used book purchases. Seller Inventory # 0674722353_abe_vg