Items related to The Industrialization of Soviet Russia: The Socialist... 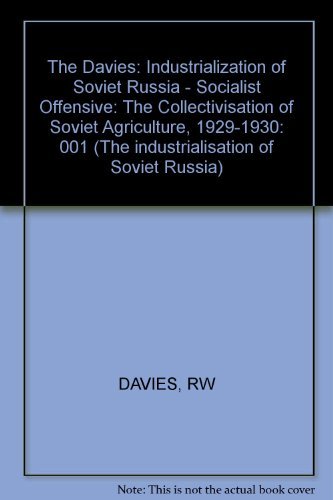 By the summer of 1929 Soviet industrialisation was well under way, but agriculture was in a profound crisis: in 1928 and 1929 grain to feed the towns was wrested from the peasants by force, and the twenty-five million individual peasant households lost the stimulus to extend or even to maintain their production. In the autumn of 1929 the Soviet Politburo, led by Stalin, launched its desperate effort to win the battle for agriculture by forcible collectivisation and by large-scale mechanisation. Simultaneously hundreds of thousands of kulaks (richer peasants) and recalcitrant peasants were expelled from their villages. This book tells the story of these events, as momentous in their impact on Russian history at the Bolshevik Revolution of October 1917, and of the temporary retreat from collectivisation in the spring of 1930 in the face of peasant resistance. The crisis in the Communist Party which resulted from this upheaval, in the months preceding the XVI party congress in June 1930, is described in detail for the first time.

R.W. DAVIES is Emeritus Professor in the Centre for Russian and East European Studies at the University of Birmingham, of which he was previously Director. In the course of his research, he has paid many visits to Russia to study in Moscow and St Petersburg libraries and in the state and former party archives. His publications include The Development of the Soviet Budgetary System, Soviet History in the Gorbachev Revolution, Soviet History in the Yeltsin Era, The Socialist Offensive 1929-1930, The Soviet Collective Farm, 1929-1933. He is at present preparing, jointly with S G Wheatcroft, a study of the Soviet Famine of 1932-3 based on recently-released Russian and Ukranian archives. He collaborated with E H Carr on vols 9 and 10 of A History of Soviet Russia.

'R.W. Davies lays bare the chaotic reality behind the images and illuminates both the successes of the new centralized economy and its colossal dislocations ... Davies is the foremost economic historian of Stalin's Soviet Union ... Though no historical work is ever 'definitive', Davies' three volumes on the industrialization of Soviet Russia are foundation stones for any further studies.' - Ronald Suny, Business History Review

'Future generations of university students may well follow courses on comparative Russian/Soviet perestroika studies from Peter the Great to Gorbachev. If so, they will find The Soviet Economy in Turmoil an essential text.' - David Dyker, Slavonic and East European Review